What's so Hard About Designing a Cover?

It seems to me that I ought to say something about my upcoming Cover Reveal and the launch into paperback of my book, BURIED TREASURE.

Although I once worked in advertising I am happy to admit that I know little about identifying a market and working out the most effective way to sell my product to that market.  I wasn't even what used to be called 'a creative' or 'a visualizer'. These were the people who dreamed up advertising campaigns and translated ideas into images.  I was a workhorse.  I was told what to draw and I drew it. And remember, these were the days when ads were initially produced with pens, paper and paint. 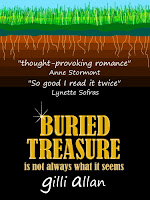 When it comes to book cover design, I am very literal.  I can appreciate a clever quirky cover, but I am not able to to produce a visual interpretation of some inner metaphorical truth about a story while at the same time, making it a desirable and intriguing image to the buying public.  Nor do I have the requisite skills on a computer to actually achieve the designs I would ideally like to produce.

Although I had produced a cover for my Indie book BURIED TREASURE, it did no more than satisfy me, and was provably not setting anyone else's imagination alight.  So from early on I had decided I would redesign my cover and relaunch the book when it went into paperback.  The latter went on hold while I wrestled with the design.

I had a notion of a cut out title, in the manner of the book Love in La La Land.  But showing through the 'window' of the title would not be images of sunny California, but an Anglo-Saxon hoard.  I played around with this idea for a long time.  There obviously is a way to do it, but I did not have the necessary skills.  But while I was still trying to achieve my aim, I suddenly realised that I could create my title using pieces of Anglo-Saxon treasure (in combination with a photograph my son gave me)

And this is how I came up with a new cover that I was delighted with.  Others in the business, with more expertise about what appeals to the public than I have, were not so convinced.  A book about relationships and not one but two archaeological mysteries looked more like a thriller or even a horror story. 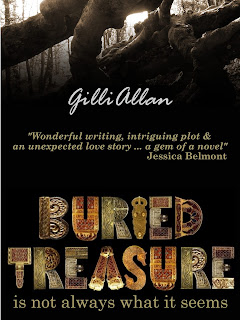 I eventually put my cover into the hands of a professional, Cathy Helms of Avalon Graphics.
http://www.avalongraphics.org/

She confirmed that, other considerations apart, my design is not in the right format to translate successfully into a physical print version.  Back to square one!  But you'll have to wait until the 9th to see what  Cathy has come up with.  I am more than delighted with the result and thank her very much for her hard work and patience.

And waste not want not, I have had a lot of fun making teasers for the cover reveal.
Posted by Gilli Allan at 9:18 AM