Thank you for inviting me to your Author Q and A, Lynne

Please give a thumbnail introduction of yourself.

I live in Gloucestershire, with my husband.  My career was in advertising as an illustrator. I still do some illustration, these days for books.

I’ve been writing seriously since my son, Thomas Williams, was little. Now grown up he’s a successful author in his own right and, as his early influencer, I claim all the credit.

What first inspired you to write?

What was your first piece of creative writing? How old were you?

At the time I was ten or thereabouts. Although I no longer have it, I can still remember my plot.   My understanding of the history of costume (something I later learnt about in art school) was unsurprisingly hazy. I was familiar with the Empire line through my sister’s enthusiasm for that period, but I thought it was a bit boring. I was far more attracted to the full-skirted Cinderella type frock. So, my own book was set in an unspecified ‘olden days’ when women wore bonnets and crinolines.

If I ever came up with a title, I’m afraid I don’t remember it, nor any of the names I gave my characters.
Accompanied by two other older ladies (possibly mother and a governess?) my sixteen-year-old heroine went on a boat excursion to visit an off-shore lighthouse. There must have been a boatman to pilot it, but I can no longer recall anything at all about him if indeed I gave him an identity.   While on the lighthouse a storm blew up and the ladies were trapped there by the turbulent seas. 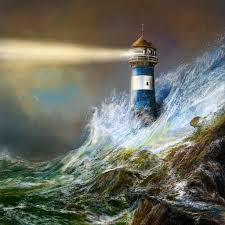 My hero was the son of the lighthouse keeper, also sixteen. (Sixteen was the optimum age for romance in my young mind.) Despite warnings not to attempt this, he nobly went out at the height of the storm to make sure the ladies’ boat was well secured. Of course, he slipped on the wet rocks, and was brought back into the lighthouse only half conscious and seriously injured.  Or was he?

The poor chap lay, heroically broken, on the chaise longue (in a lighthouse???)  Instantly going into Florence Nightingale mode to tend to him, my heroine was probably mopping his fevered brow, when he opened his eyes and smiled in a rascally way. He’d been exaggerating his injuries in order to get up close and personal!


I’m afraid I can’t supply a resolution to this tale. Unable to conjure the flirtatious banter required, or any way of conveying a growing attachment between hero and heroine, my imagination and energy failed at this point. Bear in mind that up until this time, my understanding of romantic relationships was confined to the Fred Astaire and Ginger Rogers musicals that I’d avidly devour whenever they came on the TV on weekend afternoons.

Which writers do you particularly admire?

I love crime fiction and psychological thrillers, but don’t care much for cosy crime. I adore the Kate Atkinson ‘Jackson Brodie’ series, Mark Billingham, Belinda Bauer and Sabine Durrant.  And the new (to me) author, Gillian McAllister.

The historical crime author I love is C J Sansom.  His Shardlake series, set in the Henry the Eighth’s reign and just after, is absolutely incomparable.   And I don’t usually like historical fiction!

For humour and a wonderfully intelligent and witty insights into life and relationships, I love David Nicholls.

In ‘Women’s Fictions’ I am not much of a romance reader, but I love those books about relationships that are a bit more edgy.  Authors such as Lisa Jewell, Marian Keyes and Jo Jo Moyes.  Jo Jo’s books, which are typically more challenging, is the author I most closely identify with.


What do you love about writing?

Creating a believable world, and the characters to inhabit it.  I still sometimes experience a moment of wonder, thinking: None of this existed before I dreamt it up!

What do you hate about writing?

I am not a plotter.  I have to begin by developing a scenario in which my primary characters meet, then create a back-story for each of them - initially to explain why they are there - and then to begin to establish their motivation. What happens next is often a complete blank.  Insights into my characters, and inspiration about how their developing stories interact, only occur to me once I am embarked on the story.  It means I can’t write a rough draft quickly.  The initial draft progresses slowly, in fits and starts, with loads of editing and toing and froing back and forth through the script. There usually comes a point where I become more certain of where I am going and caught up in the wonder I talked about in the previous question. In other words, until that magic moment, beginning a new novel is like wading through treacle!

Describe your ‘portfolio’ of writing

Though I have been writing for a long time I don’t have that many published works to my name.

JUST BEFORE DAWN and DESIRES and DREAMS were published by Love Stories. JBD was also published in a Polish version.  The rather strange cover pictures a close-up of a woman's face with what looks lie a cocktail umbrella stuck on her nose!

I independently self-published TORN, LIFE CLASS and FLY or FALL.
The latter three books were then republished by Accent Press.
All three have won a Chill with a Book award. http://www.chillwithabook.com/

I had a short story, Holiday Romance published in TRULY, MADLY, DEEPLY the anthology of short stories, by members of the Romantic Novelists’ Association. 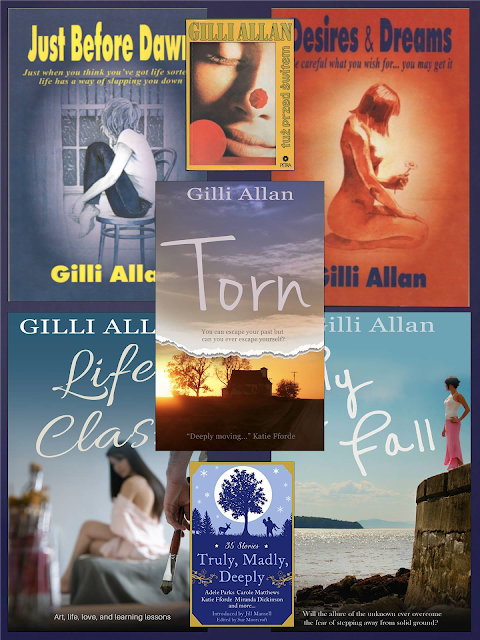 What is your proudest achievement? 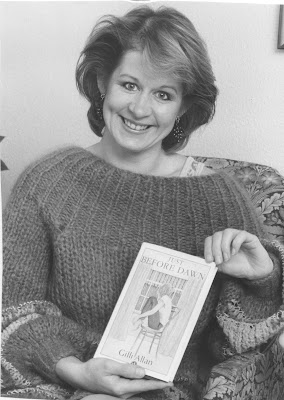 When my first book – JUST BEFORE DAWN - was published.  Though I’d continued to write as a teenager, I’d not taken the hobby seriously.  I was not clever or educated enough to aspire to be a real writer. I stopped when I went from school to art college. I only started writing again, this time with the serious intention of trying to find a publisher, in order to give myself an income  which would enable me to stay at home with my son.
But what started simply as an attempt to make a contribution to the family budget, morphed into an obsession.  This was JUST BEFORE DAWN, the first book I had ever finished. Within four months of completion I was in talks with Love Stories, a small new publisher whose ambition was to fill a niche for more unconventional and edgy romantic fiction than was supplied by Mills and Boon.  Love Stories also published my second book, DESIRES & DREAMS within a year. Sadly, Love Stories went to out of business unable to fight the big boys in the industry.

Looking back, I am even more proud, given how hard I found it to repeat the trick.


What is your current project?

My current project is set in the world of costume design.  I can’t say a lot about it, as I am only a quarter of the way through, and if you read my “What do you hate about writing?” answer, you will know that even I don’t quite know yet how it is going to pan out.  But my last book, which is waiting in the wings to be published, is BURIED TREASURE. I have had great fun designing the cover.


To give you a flavour, I’ll first give a bit of background that led to the writing of the book.
I’ve been involved for many years in the organisation of biannual conferences held at Queens’ College, Cambridge. I also have personal experience of, and interest in, archaeology.  My great uncle Sydney Ford uncovered the hoard of silver Roman table-ware, known as the Mildenhall Treasure, on his Suffolk farm. It is one of the most famous UK discoveries housed in the British Museum.   My son, Thomas Williams is a curator at the British Museum and the author of Viking Britain (for which I also provided illustrations), and of the upcoming Viking London, published by William Collins.

Given all the above I decided it would be fun to weave together these threads and create the story that became........

BURIED TREASURE
it's not always what it seems
Educating Rita meets Time Team, when the conference planner meets the university lecturer. Their backgrounds could hardly be further apart, their expectations in life more different, and, more importantly there is no wish or reason on either side that they should ever connect again. But they have more in common than they could ever have imagined.  Each have unresolved issues from the past which have marked them. Each has an archaeological puzzle they want to solve. They’re stories intertwine and they discover together that treasure isn’t always what it seems.

The official cover reveal is happening on June 8.  Until then, watch this place.

Posted by Gilli Allan at 6:19 AM No comments: