The Wild World of the Garden 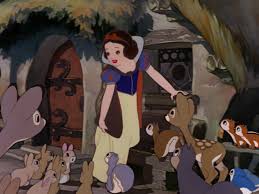 When we first moved west from the southernmost suburbs of greater London to our house in Gloucestershire, we almost immediately had two very unexpected visitors.  Although we had lived for some years on the edge of the countryside, it was a manicured countryside. I was now in the 'real' country, and awaited with glee a Snow White type existence from then on.  It didn't turn out like quite that, but over the years we have probably seen more wildlife in our garden or in the field over the wall, than we would if we'd stayed in Surrey. And I love it.


I came upon our first visitor 'strolling' down the sideway towards our back door. I looked at him, he looked at me ... and kept on coming. Leaving the door open I retreated back into the house just to see what would happen.  I hardly expected the dove / pigeon to come in, but a few hops later and there he was in the kitchen: 'So, this is what the inside of a house looks like!' he seemed to be thinking. I kept still and he made his way, in calm and leisurely fashion, out of the kitchen, via the hall, into the sitting room where I managed to immortalise the moment. In the resulting shot, my son, Tom (Thomas Williams - now grown up and the author of Viking Britain!), looks more wary than enchanted. Our visitor had a good look around then, seemingly satisfied, retraced his hops back through the kitchen and out of the house. 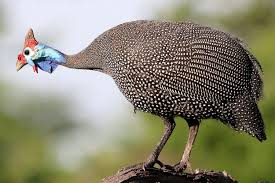 It was very shortly after this incident that I had another close encounter, but this time with a rather more exotic member of the ornithological family. I looked out of the window one day only to see a very odd looking, and very large polka-dotted black bird standing on the wall between us and the farmer's field behind us.  And when I say 'very large', I mean very very.  It was getting on for the size of a peacock to which the  guinea fowl  is related, I later discovered, when I identified it. 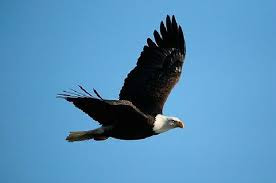 Another unusual siting, was made by my husband and at first I thought he was either drunk or teasing me. It wasn't a buzzard, the largest bird we commonly see circling over the valley. He'd spotted a bald eagle!  I was just in time to see it and agree with his identification.  It turned out to be an escapee from a bird sanctuary many miles to the north of us. It was later caught and returned home.

We hear more than see the pheasants, their clacketty gobbling call is unmistakable,  but they do sometimes pay us a personal visit. The first time I saw it in the middle of our lawn I thought the big green bird with a red head  must be a parrot! Sadly the green woodpecker is not a common sight in the garden. Slightly less uncommon, but still not frequent visitor is its cousin the lesser-spotted woodpecker.  Torn between the desire to photograph them and the fear they'll fly off before I return with my camera, I usually just stand at the window and watch - so the pics above are stock.

It's always exciting to spot a jay, that flash of iridescent electric blue contrasting with the soft pinky buff  plumage is an instant giveaway, but they're there and then they're gone. 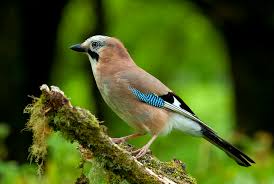 We have most of the usual garden birds, blackbirds, dunnocks, robins, wrens, all of the tits and finches, but very few sparrows and no starlings, and the numbers of thrushes have diminished over the years. When we first moved here, even when I couldn't see them, I could hear them singing or bashing the living daylights out of a poor snail (and no, I don't use slug bait), but now there are far fewer.  I am always very happy to see them. 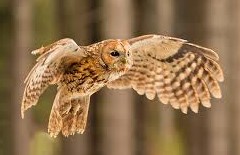 We hear tawny owls but I've only once seen one here, swooping low past the window in the gloaming...... 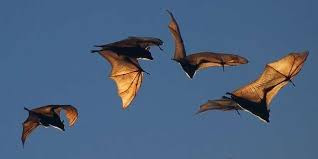 And first, perhaps, I should mention the very cheeky visitor who has no compunction about stealing the birds' food, even when he knows we're watching.


Impossible for a very amateur photographer to capture the bats who regularly swoop around the house on a summer evening. Like some of the others in this post, this  fabulous picture is not mine. 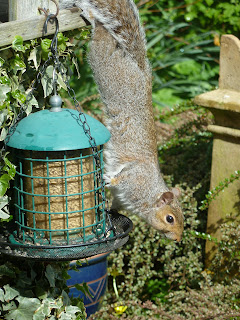 Unlike the bats, badgers are very rarely seen. You have to get up from your bed if you think you've heard them.  But even then, it's usually so dark they look like no more than fat black cushions shuffling around the night garden.  They leave the evidence of their depredations, however - churning up the lawn to look for grubs and several times, virtually destroying the bird feeder to get at its tempting contents. 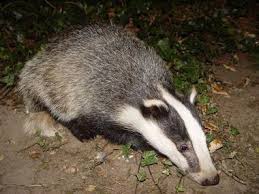 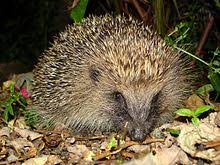 We found a hedgehog once, apparently considering a small space between the gnarled trunk of an old rose bush and the ivy covered wall behind it, to build a nest. After finding herself being peered at, she apparently decided the spot was too public; we don't know where she went.  Over the years we have found hedgehog droppings, but I guess we are like so many places, the population has dropped off. But we do make sure the garden is hedgehog friendly (in other words - neglected in parts). 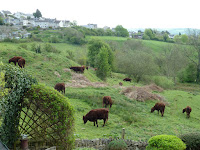 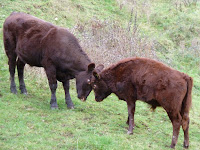 Owned by Rebecca Charley and Richard Spyvee, the management of the farm in the valley behind us is kept as natural as possible, without the use of sprays and chemicals. In fact, the farmer, Rebecca, is the south west farming adviser to the National Trust and is a multiple award winner for her small herd of Red Poll cattle. Rebecca has appeared on BBC TVs Country File describing the management of these lovely animals. They enjoy a peripatetic life style  to insure a variety in their diet, and they are grazed at various locations around here, so they are only in the field behind us intermittently. But we love it when they are there - we always refer to them as 'our cows' - and enjoy giving them apples and ivy, which they love.


That field beyond out garden wall is steep in parts and boggy in others, with a tendency to become overgrown with bramble. Horses are also kept there from time to time, but they can be be a bit snooty. Otherwise it is empty apart from the foxes and rabbits, and the occasional worker, clearing the overgrowth with a very clever, radio-controlled 'bramble digger-upper'. 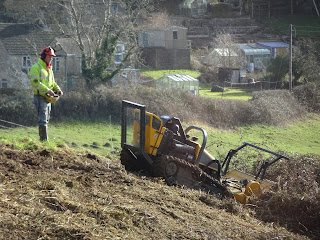 When we first lived here, we never saw any deer.  But over the last few years there's been an increasing population, mainly of roe deer. Indeed, over the last six months the deer have apparently decided 'the grass is greener' and we've caught them trespassing in our garden on several occasions.So far it's not been a problem, but I'm slightly concerned how much more tasty out garden will look to them in the summer. 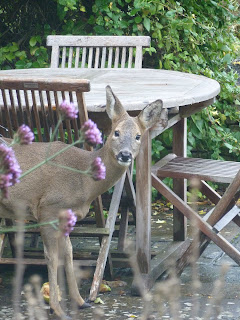 Sadly, the spawn in the pond has dwindled over the years. Even when we've had tadpoles, they've vanished before metamorphosis. No fish but we do see newts, frogs - and toads, hiding in damp corners. 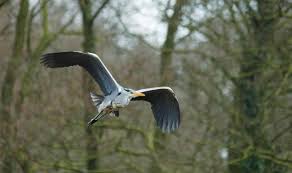 A visitor to the pond, on the look out for easy pickings, is the heron.


And last but not least, the beautiful slow worm, curled in the sun, looking like some extraordinary piece of Viking jewellery. 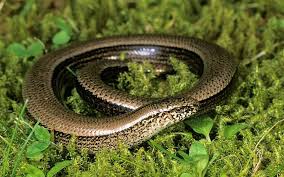 Romancing Robin Hood is a contemporary romance based on the life of Dr Grace Harper, a medieval history lecturer with a major Robin Hood obsession.
Grace’s love of her medieval hero is so strong that, instead of writing a textbook on medieval life as her boss believes, Grace is secretly writing a novel about a fourteenth century potter’s daughter called Mathilda, who gets mixed up with a real outlaw family of the day, the Folvilles. (A story you can also read alongside the modern romance.) Unfortunately, Grace is so embroiled in her work and passion for outlaws, that real life is passing her by. This is a situation that her best friend, Daisy, is determined to put right. With her wedding  approaching fast, Daisy can’t help wishing for a similar happiness for her Robin Hood loving friend...

When you’re in love with a man of legend,how can anyone else match up? Dr Grace Harper has loved the stories of Robin Hood ever since she first saw them on TV as a teenager. Now, with her fortieth birthday just around the corner, she’s a successful academic in Medieval History—but Grace is stuck in a rut. 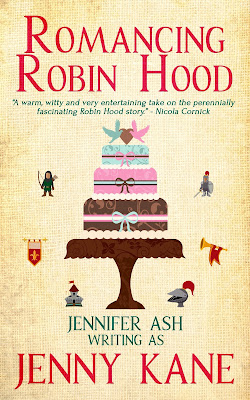 Grace is supposed to be writing a textbook
on a real-life medieval criminal gang—the Folvilles—but instead she is captivated by a novel she’s secretly writing.
A medieval mystery which entwines the story of Folvilles with her long-time love of Robin Hood—and a feisty young woman named Mathilda of Twyford. Just as she is trying to work out how Mathilda can survive being kidnapped by the Folvilles, Grace’s best friend Daisy announces she is getting married. After a whirlwind romance with a man she loves as muchas the creatures in her animal shelter, Daisy has press-ganged Grace into being her bridesmaid.

Witnessing Daisy’s new-found happiness, Grace starts to re-evaluate her own life. Is her devotion to a man who may or may not have lived hundreds of years ago really a substitute for a real-life hero of her own? Grace’s life doesn’t get any easier when she meets Dr Robert Franks—a rival academic who she is determined to dislike but finds herself being increasingly drawn to… If only he didn’t know quite so much about Robin Hood. Suddenly, spending more time living in the past than the present doesn’t seem such a good idea...

Brilliant! Sounds a great read.  Thank you for visiting my blog, Jenny, and telling us all about your book. Who hasn't become a little too caught up in daydreams and wishful thinking?  My own favourite Robin Hood was Michael Praed.  Good luck with the rest of your book tour. 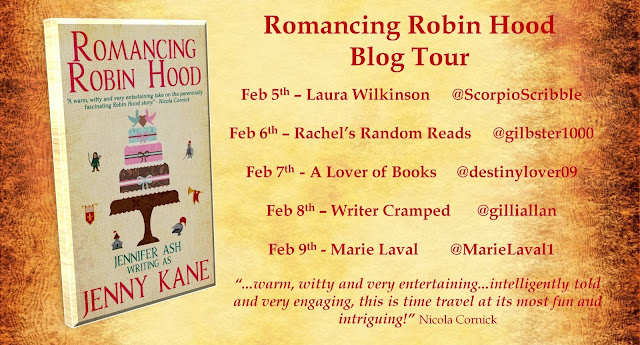