Reviews? But they’re all written by your friends, loved ones or your Aunty Bessie aren’t they?

Well, no, actually. Maybe I’ve been lucky. Although I have to confess I don’t have hundreds, the reviews I do get are usually flattering. But I can assure you they are not from personal friends or relations. Some are from acquaintances - people I have got to know through the on-line writing community - but does that make them invalid? I hope not. I’d far rather people were honest than praised me to the skies, just because they know me! I often say that I don’t write conventional romance. Real life is messy and unpredictable. I prefer not to prettify or to gloss over the realities of starting a relationship. So I know everyone won’t like or ‘get’ my books. But I am tremendously grateful when people do and then go to the trouble of telling me (and the reading public) so I’d love to share with you some reviews received this year.

Sometimes you read a book and the characters stay with you no matter how many books you read in its wake. Torn is such a book. I found myself liking and disliking Jess by turn as Allan's strong prose and authentic dialogue guides the reader through the ups and downs of this complex woman as she goes through a rite of passage to discover what it really is she values in life. At times you want to shout at her for the decisions she makes - just as sometimes we want to shout at ourselves for our weaknesses and rash choices. I warmed to both male protagonists, as wonderfully different as they were, and loved the whole feel and colour of the novel. It's a while since I finished yet I can still picture the rural scenes, which transported me from the busy city in which I was reading at the time. Thoroughly enjoyable and thought-provoking as well as a welcome escape into the country!

Thoroughly enjoyed this. It's a well written book with a gutsy storyline that keeps you guessing all the way through, makes you constantly change your opinions of the characters along the way and the rural setting sets the scene beautifully. The issues that the author covers are dealt with in a pretty true-to-life manner, with sensitivity where needed and it invoked a myriad of feelings whilst I read. Jess is a great character; she is strong yet weak, kind yet a little selfish. Some of the comments her 3 year old son comes out with bring lovely light moments where I laughed out loud. I found Dan easy to love and felt quite protective over him, and whilst it took me a good while to warm to James (he suffers from foot-in-mouth), I eventually did. I was literally torn over who Jess should choose. Can definitely recommend adding this your reading collection.

A touching sensitively written story while dealing with sensitive issues and ways people can find themselves in. Definitely worth a read. 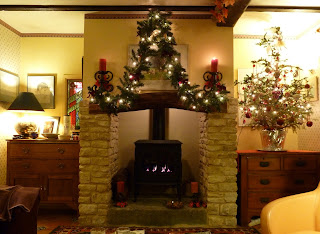 I love Christmas and always try to make it as special as possible, but last year the fates conspired against me. My husband went down with a feverish cold at the beginning of December, which sent him to bed (a very rare occurrence) for 48 hours. Before he was fully recovered, I caught the Norovirus, and he had to be nurse. Two days later it was his turn.

Christmas was still a fortnight away. Although my mother-in -law was due to arrive on the 20th, in our minds Christmas proper would not commence until the arrival of our son and daughter-in-law on the 27th. Not only were they planning to spend longer than usual with us, we had the imminent commencement of his new job to celebrate. On the 7th of January he was starting at the British Museum as research curator for the 2014 Viking Exhibition. Even so, I had to have everything prepared before the arrival of my first guest, so as soon as I was able to I had to pull myself together. Between trips upstairs to make sure my patient was all right I was wrapping presents, preparing food, doing housework and putting up decorations. Within a few days my husband had recovered and, together, we managed to get everything ready before our first visitor’s arrival.

However, it seems that the Norovirus is a very tenacious and long-lived bug. All went well until Boxing Day, when mother-in-law began vomiting. She had obviously picked up the bug from one of us. Thankfully, given the severity of her illness, our other visitors had not yet set out. We phoned our son and told him not to come. I will draw a veil over the next few days but the washing machine was in almost constant use, and I had to make several trips to the supermarket and chemist for extra cleaning products and strong disinfectant. My mother in law was in bed for a week.

All this is just to explain why, after three further postponements (I will spare you the reasons why), we have just celebrated Christmas with our son and his wife. A jolly good time was had by all.

Posted by Gilli Allan at 8:51 AM No comments: