Things aren't always what they seem.


You've heard about the woman who walks into doors? Well In my case it was the sheep wot dun it.

The only near eruption of physical violence in my marriage came from me.  I still recall the incident vividly. We were sitting side by side in the parked car, me in the driving seat. I was seething and drew my arm back to hit my husband. But it wasn't just the impracticality of the location for a physical fight which stopped me. I just couldn't do it. The trigger for the argument was trivial and certainly did not warrant anyone getting bruised - physically or psychologically - I ended up giving him a half-hearted shove.

This happened in the early years and since then, despite no re-occurrence, I have always accepted the label of being the aggressive one in the marriage - relying on my husband’s admission that even if that blow had landed where I initially intended, he probably deserved it. 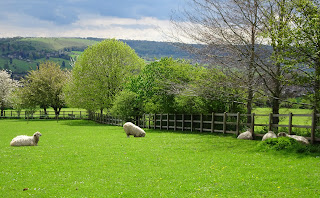 About six weeks ago I took myself out for a walk, on my own. My initial aim was to walk down to the farm and back. I say “down” as the farm is lower than we are but the road skirts the side of the valley. It dips, then climbs and then dips again.  Undertaken briskly, this short walk takes about half an hour but delivers a bit of a work out. 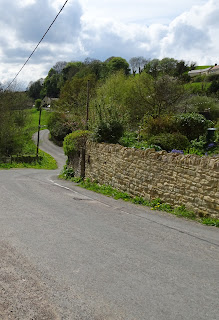 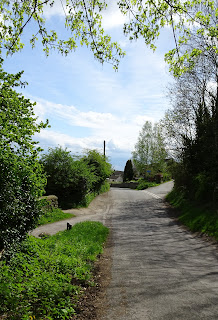 By the time I reached the farm’s entrance I was still feeling fresh.  Instead of retracing my steps I turned right, taking the uphill lane opposite the farm’s driveway. “I’ll just walk as far as the sheep, to say hello,” I thought to myself.

This lane is steep at first, but then begins to level out. I began to look ahead for the 6 extremely plump and woolly sheep in a field that abuts the road. The last time I’d visited them I guessed they might even be pregnant.  But as I progressed I couldn’t see the sheep, let alone any lambs.  Then I realised that the furthest field of the small-holding was partially obscured by the contours of the land.  And wait….!   I spotted a few creamy humps just beginning to protrude above the green slope. The backs of the grazing animals. 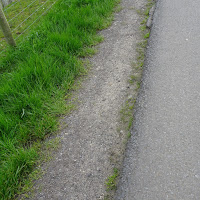 The next moment I was lying flat on my face - half on the lane, half off it - feeling extremely stupid. There'd been no heart-stopping lurch when you know you’ve tripped. No time to throw out arms to break the fall. No sense of disaster.  Just bang! One moment upright, the next splayed horizontal. To paraphrase Tommy Cooper's famous line - Ground face, face ground!

On revisiting the spot today I confirmed what I'd suspected. For several yards the ground is broken away at the edge of the road and, while looking ahead, I'd put my foot in this gully!


(What I also discovered today is that there are now two lambs. Mother and babies are separated from the others.) 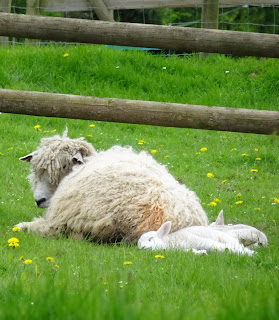 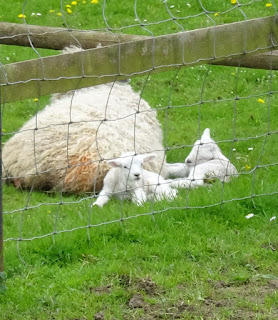 Needless to say, after my prat-fall I gave up on my intention to visit the sheep.  I walked home with blood dripping from a deep graze on my hand, various aches and pains, mainly around my ribs, and a sore face.

It wasn’t till the next day that I truly realised what I’d done to myself. While affording me some measure of protection - but not to themselves - my glasses had rammed hard against my cheekbone, brow and the side of my nose. Fortunately my black-eye did not puff and close up, but the livid bruise took over four weeks to completely disappear. 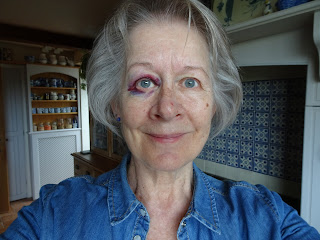 Tomorrow I am going into town to collect my new glasses
Posted by Gilli Allan at 8:46 AM 2 comments: