Every year, to a greater or lesser extent, I am afflicted by the January blues. But if SAD (Seasonal Affective Disorder - caused by the reduction in natural light) was the only reason I become fed-up and sluggish, why am I cheerful, energetic and happy in November and December? No doubt my mood is influenced by a variety of causes, of which SAD is only one. It seems that if I am happily busy, have plans and projects, feel that my life is on an upward trajectory, I am fine. I still don’t like the grey dismal days, I still get an instant surge of wellbeing if the sun comes out, but I can get along quite well without retreating into a shell.

Before Christmas most of us are very busy. We make endless lists. We have presents to buy and wrap, food to cook, people to see and a home to clean and decorate. And then, after all that work, there’s the reward - a week or two of enforced self-indulgence. Perhaps I’m lucky, but I’ve never understood the people who moan about Christmas, who don’t want to get together and feast with family and friends, who don’t want to give and be given presents, who don’t want to play silly games and pull crackers, who don't want an excuse to be lazy. Yes, it’s artificial and, if you don’t believe in the Christmas Story, it’s meaningless unless you approach it, as we do in our family, as a pagan midwinter festival celebrated simply for the fun of it, to lift the spirits. It’s only once a year! 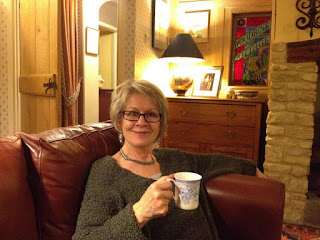 But what goes up must come down. A cliché I know, but it springs from the truth, as all clichés do. The aftermath of Christmas is inescapably dreary. The presents are put away, the decorations come down, the tree is consigned to the garden for disposal (or in our case - skinflints that we are - for nurturing through the year, in the hope we can use it again next December) and the house looks bare and dusty. We’ve eaten and drunk too much and we need to go back on a diet; it’s not surprising that a low-level depression kicks in. I sometimes I wish I was a dormouse and could just hide away, somewhere snug and comfortable, and sleep from January 6th till February 1st. When this mood hits me and I become aware that even when the opportunity arises, I don’t want to go anywhere or do anything, that I am beginning to get slightly agoraphobic, even about going to the supermarket, that I am only wearing my most shapeless and scruffy clothes, I know I must start taking St John’s Wort!

Some Januarys I don’t need to self-medicate. If my life is going with a swing, if I’m busy on a project or have outings to plan and events to look forward to, I can survive the awful, grey, dreary, dragging weeks. And 2012 should have had one of those positive, upbeat beginnings. This year I did have something to look forward to - the imminent publication of my book, LIFE CLASS, by the epublisher who launched in the Autumn of last year, Lysandra Press. But in the second week of January I received the news that its chief had suffered a convergence of personal and domestic problems which threatened to overwhelm her if she didn’t simplify her life. Her new enterprise was the casualty. Lysandra Press has folded.

There was almost a sense of the inevitable about it. Why wouldn’t they fold? This is what always happens to me. It would be nice if for once, in this cosmic game of Snakes and Ladders which I appear to be playing, I could climb more than one ladder before slithering down a snake back to square one.
Posted by Gilli Allan at 9:26 AM 11 comments:

'Torn' is anything but your standard romance with predictable conflicts and stereotypical characters. It’s much more, and a thoroughly enjoyable read

says Sanda White Nachlinger, in her fabulous 5 star review.
http://www.amazon.co.uk/gp/pdp/profile/AJ7YSXO03UGMH/ref=cm_cr_pr_pdp
Posted by Gilli Allan at 8:52 AM No comments:

There's a big gap in the market for intelligent, thought-provoking novels for women who aren't still in their twenties and who aren't obsessed with clothes, one night stands and city living.

says Lally, in her amazing 5 star review for TORN.
http://www.amazon.co.uk/gp/pdp/profile/AYMF754XCSYDW/ref=cm_cr_pr_pdp
Posted by Gilli Allan at 8:48 AM No comments:

"I love this novel! It's warm and witty and sharp and clever and it made me think"

...says multi published author, Margaret James, about TORN.  Margaret's most recent book, due out any time now, is 'The Penny Bangle.'
Posted by Gilli Allan at 6:59 AM No comments: