NOT ALL TURNING POINTS ARE LIFE CHANGING

So what did a Hairy Hobbit have to do with the major turning point in my life?

There are probably many turning points in life that you simply don't recognise as such  How can you know what might have happened had you missed that train? Was your life unwittingly changed by coming off the roundabout at the wrong exit that time?

There are also those moments when you did make a deliberate choice, and in looking back you are able to recognise your decision had significant consequences.  But which of these was the most life changing?

The only subject at school I was demonstrably good at was art. I’m from an arty family, and parental expectation encouraged me in that direction, despite the fact that my all-consuming hobby was writing endless romantic sagas. They assumed that this was more to do with my hormones than a form of self-expression that required fostering. I agreed with them and as soon as I was able, left school and went to art college. 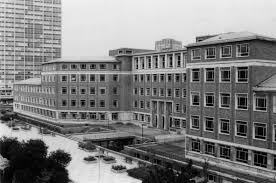 Croydon Art College was something of a disappointment.  Not only was it a time when abstract expressionism was ‘the thing’, and what you said about your work was taken more seriously than the skill with which you’d executed it, but the college expected us to work harder than I was prepared for.  It was the social side and the friendships I made there that illuminate that short period of my life. 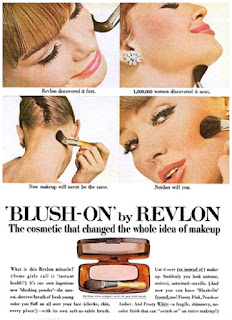 After two years I decided to get a job in the ‘art world’. As a nineteen-year-old art school drop-out, who had little to show in the way of a portfolio, it would have been more surprising if I had been successful in my quest. But because I’d left home to flat-share I had to support myself somehow.  With no obvious skills other than the ability to draw, I worked as a sales assistant - selling shoes, then accessories, then children's and teenage fashions, and then wigs in various London Department stores - and I intermittently supplemented my income with bar work.  Increasingly depressed, I eventually decided to ‘train’ as a beauty consultant for Revlon - then one of the major cosmetic and skin care brands - but after just over a year I came to realise that the only face I am really interested in is my own (and I prefer it not to be orange).

I then found a commission-only job as one of a group of girls ‘picking-up’ U.S. holidaymakers in London’s tourist hot spots, in order to inveigle them onto a free sightseeing coach tour of London, plus a free lunch at the Hilton.. What was the catch?  That these unfortunates were then subjected to a high-pressure sales pitch to buy Real Estate in Florida.
Everyone I knew was amazed I’d taken this job. It was clearer to them than to me that I’d not be able to hack it. The first (and most disabling) of the drawbacks was that I’m shy and found it hard to approach anyone.  Second - we girls had to find married couples (not shacked-up, not brother and sister, not 'just friends'). Third - it’s sometimes harder than you’d think identifying Americans; I had my share of Germans and Canadians. Fourth - we were supposed to only offer the freebie tour to people in employment (not students, not retired).  And fifth - black married couples were acceptable but not mixed-race couples (in case it made the rest of the tour feel awkward)!  This, the longest job to explain, was the shortest job of my life.  I managed 4 weeks and spent most of the time weeping in coffee bars. I hardly earned a bean.

All the while, but only in fits and starts during these barren years (no boyfriend, no money, low self-esteem), I was still on the look-out for my mythical art job.  I considered editorial illustration or book illustration or fashion drawing, and applied for junior positions in the art departments of anyone I could think of, while gradually building up an increasingly competent portfolio. 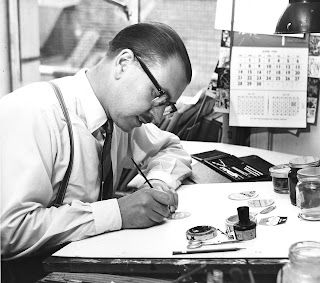 My father was an Ad man all of his working life, but by the time I left college he was the casualty of an advertising agency takeover. He had gone from Creative Director to working for himself. Although he was unable to help me directly, he was the unwitting channel to my big break.

He had a photographer friend, Harry Scotting, who was more than just an industry colleague.  Harry had long been a family friend and as a favour had quite recently converted all of my best art-work into photo copies. But even with a far more professional portfolio I had yet to make an impression on any likely employer. 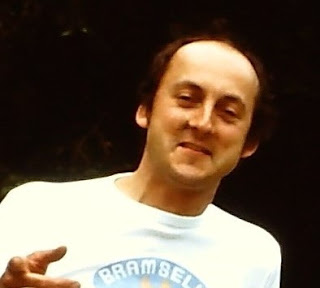 Harry was throwing a party at his studio in Midford Place, near Warren Street tube station.  My parents were invited.  I was out of work, had no boyfriend, and was in need of cheering up, so I went along too. There I met a man, Peter Sutton who had not long arrived in the country (but with British friends in advertising, had wangled an invite to the party). He too was unemployed and looking for a job as an advertising copy-writer, .

Up until this time I’d been told over and over that I was too choosy about men. So when this very small man, a good ten or more years older than me, with wild hair and a wild beard, and a very plummy accent despite being South African, took a very determined fancy to me and kept badgering me to dance, I eventually capitulated. The man who that evening my parent’s nick-named my little hairy Hobbit was extremely persistent and, although I didn't find him physically attractive in any way, Peter had the gift of the gab and he made me laugh. I decided the time had come to take my friends’ advice and accept his invitation to 'go out'. From the start he had a misguided view of me. I was 'an artist' and therefore must have far more intellectually adventurous and alternative tastes, than I actually did. His own enthusiasms tended towards esoteric jazz, art house movies, ‘happenings’’, and shows where the whole performance was conducted in mime!!!!

Peter was always late to our various rendezvous in London.  I was coming to the end of my patience. I knew he had higher hopes of the relationship than I did. I never slept with him - I don't think I even kissed him hence the nickname he awarded me Frozen Camelia! - and fed-up with hanging around waiting for someone I was not that bothered about (but not wanting to lead him on) I knew I would have to take a stand soon. To make things even more awkward he'd taken to calling me his 'lucky charm' as he'd got the job he was after with one of London's top ad agencies. The major turning point in my life came after I’d spent the day hawking my specimens round various artists’ agents and magazines with no reward.  So the luck which might have swooshed past me without stopping that evening, was temporarily halted by the fact I had my portfolio tucked under my arm when I met (or rather, when I began waiting for) Peter, outside the South African Embassy on Trafalgar Square.  Standing alongside the permanent Anti-Apartheid picket there (with them in spirit if not actually demonstrating) I began checking the time. Twenty-five minutes passed. I was tired and fed-up and decided to go home as soon as the minute hand reached the half hour.

The beam - focused on me from that lucky star hovering overhead - turned up a notch when Peter arrived with a minute to spare.  He told me we were invited to dinner at the home of a friend of his, Alan Austin.  Dinner was not what I expected. I ate my portion of Indian takeaway sitting on the floor as Alan’s small flat was under-furnished, and his table wasn’t big enough to seat all of his guests. His girlfriend, Persis Khambatta, an Indian model and actress - who’d been Miss India and Miss Universe and was in several Hollywood films in subsequent years – was there, as were some of her friends or family (I was never sure who they all were) who were in the country.

My lucky star now turned its beam up to full strength.  Alan, it turned out, was a senior illustrator with David Judd Studios – an advertising design company.  During the evening he looked at the portfolio of my work (which I of course still had with me) and seemed impressed. He told me the studio had just lost its junior illustrator, and suggested I phone them ASAP.

I called the following day and made an almost immediate appointment to see the studio manager. I was offered the job there and then, and started the following Monday. My confidence soared and with it my sense of being in my proper place in the world.  I am afraid I did stop seeing Peter Sutton.  It seemed my only purpose in his life was to get him his job (by unknowingly sprinkling my magic).  His part in my life was to do the same, but in a more direct way.  His continuing lateness was also a factor in our parting of the ways.


About fifteen months later, my husband-to-be came into my life.  Geoffrey is and was very interested in art and actually more knowledgeable in the subject than I am. He may deny it, but the fact that when he met me I was an artist, (even if not of the 'fine' variety) had to make more of an impression than ‘shop girl’. Not only that, I was self-assured, confident, and at ease in my own skin. I can’t be absolutely sure of this, but I often wonder if we’d met when I was a demoralized and depressed shop assistant, would he have been so attracted, and pursued me with such determination?  And it is my husband who has supported me, been my best friend and given me the life that has enabled me to become a writer.

That crucial moment, outside the South African Embassy, when my little hairy hobbit managed to arrive in the nick of time, was very possibly the crucial turning point in my life.