Extract from TORN. Out now as an e-book on Kindle.

New Year’s morning....
Jess opened her eyes. It was pitch black outside the window; inside, the room was divided vertically and horizontally by dark slabs of shadow. Only a pinpoint of amber light, flickering now and again, beamed from her laptop. Though her brain was clear, her head was banging and her mouth felt furry and tasted sour.
Drunk’s dawn, she thought. Brilliant. Have I had more than an hour’s sleep? At least she was alone. The man had crept away while she slept, thank God. Then she heard his breathing, with its characteristic asthmatic wheeze, and the dip of the mattress as he stirred. She froze, revolted by the idea that her skin might come into contact with his. The idea of touching a bony, hairy male leg – or worse – was repellent. And if he was rousing she didn’t want him to realise she was awake. He turned over then turned back again. The wheeze had developed into a definite whistle. Jess sensed he’d woken and was probably lying there wondering what to do. If she was any kind of decent human being she would tell him she was awake and go and fetch one of Rory’s inhalers for him. But she stayed rigidly still and tried to control her breathing.
She could come up with all sorts of rationalisations for her ungenerous behaviour. She was naked and didn’t know if her dressing gown was close at hand. He’d be embarrassed if he thought he’d woken her. He might even be ashamed of his frailty, not that admitting he was asthmatic had seemed to bother him earlier, but still, he might not want to make a big deal of it in the early hours of the morning. More importantly, she was embarrassed. It was a long time since she’d done anything so bloody stupid and had lost some of the bravado necessary to face the stranger in the morning. Especially after you’ve thrown your guts up down the loo a few hours earlier, she thought. Had he fancied her sufficiently after she’d vomited, to proceed with what he must have believed, rightly, was on offer before? And if they’d had sex did he use a condom?
The head of the bed was positioned under the flight of stairs that led up to the attic room. As Danny got up he cracked his head on the slanting ceiling. He swore quietly then padded across the room, managing to stumble over something – probably the toy basket – on the way to the bathroom. As he pulled the door closed behind him and she heard the light click on she let out her breath. Good. She couldn’t remember much about Danny but at least he must have a modicum of sense. Even if he were still half asleep the spare inhalers would be easy to spot in the cabinet. As she had the thought she heard the clatter as something fell into the hand basin below the wall mounted cupboard.
So, he must be thoroughly awake by now. Perhaps he would use the inhaler then decide to get dressed and let himself out of the house. She need never confront him face to face again. Though she could recall thinking he was good looking, that was last night, and under the influence of alcohol; should they meet again, at some future time, would they even recognise each other? But Danny padded back to bed and slid carefully in under the duvet, evidently making an effort not to disturb her. What a cow I am, Jess thought.
When she opened her eyes again it was bright day. If wearing nothing else, she still had on a watch; it was nearly ten. It would be tempting to close her eyes again and lose herself in sleep, but she knew it would resolve nothing. If the man in her bed had any sense of shame, he would have removed himself before now. But he was still there; even if not touching she could feel the radiant heat of another body. Nothing for it then. She would have to face him – and the situation – now or later. Better get it over with. Slowly and cautiously Jess began to turn. She didn’t want to disturb him before she’d had a good look. Cautiously she pushed herself up on her elbow.
He slept like Rory often did. Arms flung back on the pillow, hands limp and relaxed. His face was turned away, against his shoulder, but she could see his profile; the tousled ashy hair, the straight nose, the fan of long eyelashes, the concave plane beneath the cheekbone heavily stubbled with soft blonde whiskers – almost, but not quite a beard. The beaded chokers were still around his throat, the beads dragging to one side, caught in the crease between neck and collar-bone. A part of his smooth chest was exposed, the nipple dark and small against the creamy, fine grained skin. Jessica found herself mentally mapping each detail; the pull of the deltoid against the bicep, the perfect rounded form of his shoulder. When he turned his head she could study his mouth, the mouth she had kissed over and over again; she was now perfectly able to recall that part of the evening. What struck her more forcibly than his beauty, was his youth. Jess had realised he was younger than her, but now she wondered by how much. Tentatively she touched his upper arm; the skin felt silky and cool.
His eyes opened – clear, blue-grey, the iris ringed with indigo. She saw the sudden widening of the pupil but by no other gesture did he display surprise at finding himself under scrutiny. He stretched and smiled and withdrew his arms from their up-flung position.
‘Hallo Jess....’
Posted by Gilli Allan at 4:44 AM No comments:

The power of memory 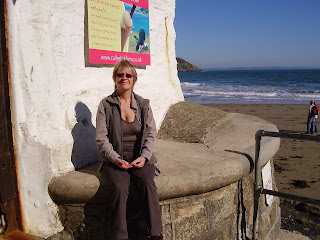 I don't have a good memory. I recall my childhood in brief, unconnected visual snapshots. But all my adult life I've had a memory of being a child, on holiday. It has always been a very strong, but unspecific memory. In my minds eye I see a little shop, set at a slight angle to a rough stone wall. Outside the shop is piled the ephemera of beach holidays - buckets and spades, fishing-nets, sun-beds, etc. Along from the shop there is a gap in the wall where stone steps lead down to a beach, which I can't yet see. There is a drift of sand against the wall. As much as anything it is the smell that I can recall most vividly. Sand mixed with the smell of the sea, sun-warmed stone, hot plastic and vanilla. No one has ever been able to enlighten me about where this was.
The strength of this memory is in the intensity of the feelings it evokes in me still. It is a shortcut to those childhood emotions; the almost unbearable excitement of being at the seaside, with everything that meant - paddling, sand-castles, icecream, scrabbling over rocks and fishing in rock-pools, parental attention, fun.
Last October my husband and I stayed with my sister and her partner in a part of Cornwall that we'd not been back to for many many years. It was my sister, in particular, who wanted to revisit our childhood haunts of Mevagissey, Porth Loonie beach (Caerhayes) and Goran Haven. I didn't dwell on whether I would find the location of this childhood memory, but it returned to me in a rush as we walked down the road from the car park at Goran Haven. Before we even reached the quay it was the smell that hit me, something about the concentration of that seaside, seaweedy ozone smell that funnelled up the lane. And when we reached the front, there was the little shop - shut-up in October - set at an angle to the wall. Sadly the wall has obviously been extensively remodelled to allow vehicle access. But I am absolutely positive that this is the spot.
I don't know why I am telling this to the world - or more likely I'm talking to myself - but it was strangely important to me. And now, in a sense, I'm sad that the memory has been defused.
Posted by Gilli Allan at 4:05 AM 4 comments:

I have recently epublished to Kindle. The book, TORN, is now available from Amazon, or from the Kindle book store. It was a nightmarish marathon. Over a period of several weeks I painfully got to grips with the requirements and then, having thought I'd succeeded, had to redo it - correct and upload again - several times before I was satisfied. Who would have thought 'tranquility' has 2 Ls. The word was on the cover, so not picked up by either my spell checker or, more annoyingly, by my super-educated husband. I know the claim to be dyslexic is much bandied about, but trust me, I researched the subject for a book and found I could tick virtually every box. Obviously I am on the mild end, but the knowledge was a damascene moment for me, explaining so much about how my brain works or rather doesn't work, and why it constantly fails me when I most need to remember or understand. It was a weight lifted from me. I've always clung to the belief that I wasn't thick, but too often all the evidence points in that direction. Well, I've done it. Now comes the even more difficult job of promoting TORN. Gilli
Posted by Gilli Allan at 9:53 AM No comments: