Yet another opportunity for time wasting! The Famous Five Plus blogspot has just been launched. 5 indie authors, including me. http://famousfiveplus.blogspot.com/
Posted by Gilli Allan at 9:49 AM No comments:

If you're interested to know more about me, I make an appearance here and there on other people's websites and blogs.  In all of them I'm just waffling on, repetitively, about the same old subject *Gilli Allan* but if you want to take a look.....

The first person to invite me to be a guest on their blog was the peerless Pauline Barclay.
http://www.paulinebarclay.co.uk/#/gilli-allan/4551043237

Then I was interviewed by the witty and wonderful Jane Wenham, on her website Wannabe a Writer.
http://wannabeawriter.darkskipper.com/wp/news/2011/08/gilli-allan/

Then mad Mandy Baggot invited me onto the Meet & Greet page on her website.
http://mandybaggot.webs.com/apps/blog/show/8098390

And I have just been interviewed again, by the lovely Laura Williams, on Bookworm Ink!
http://bookwormink.co.uk/1/post/2011/10/an-interview-with-gilli-allan-author-of-torn.html
Posted by Gilli Allan at 3:41 AM 2 comments:

Yet again, I find myself writing about clouds and silver linings.

Only now, 4 days after we were due to depart, am I able to write about this without grinding my teeth.
My holiday to Italy at http://www.arteumbria.com/ was cancelled.
I was the invalid, still recuperating from a minor operation, and looking forward SO much to a week of 'doing art' with tutors Andy James and Mark Kelland, and then enjoying a week of R & R with our friends, but it was my husband who developed a severe ear infection.  Obviously, flying is a very bad idea in the circumstances.  So we had to cancel the arrangements.

The silver lining - the contract offered by Lysandra Press - is currently still in place. Phew.
Posted by Gilli Allan at 5:39 AM 2 comments:

We are off to Italy in a few days.  So this will probably be my last post for several weeks.  So, I just thought I'd  let the world know ... I have been offered a contract by a new E publisher. They want to publish my current book Life Class. They also want to look at Just Before Dawn and Desires & Dreams. I don't have high hopes of the latter two, as they are likely to seem very dated now. But who knows?

I have come to a point in my life, and in my understanding of the publishing business, where I  think it very unlikely I will ever be 'mainstream' published again.  Unless (ever the optimist) one of my books goes viral in the E-Sphere.  So the e-book definitely seems the way to go.

I am swanning off to http://www.arteumbria.com/  in a very good mood.
Posted by Gilli Allan at 2:49 AM 2 comments:

My Festival 'fringe' gig at the Daffodil Restaurant in Cheltenham

I've done it!  What a relief.  And I didn't stutter, pant, faint, freeze, bumble, fall over or lose my place!

Fiona Stephens, who arranged the whole thing and who was there to welcome me at the Daffodil  and settle me in, was lovely. The Daffodil is a sympathetically converted 1920s cinema.  http://www.thedaffodil.com/  I've been there to eat several times, and once for a wedding, but quite a few years ago.  Doing my 'turn' there, reminded me what a lovely venue it is, and we've resolved to go more frequently in future.

I was accompanied by Geoffrey, my husband, who was charged with taking a few pics.  We were given refreshments, a glass of wine for me, which helped settle the nerves, and a coffee for him. It had started to rain heavily, thankfully after we arrived,  so some of my audience arrived wet and flurried.

The truly wonderful tea was served.  Each table was brought their own tower of sandwiches, cakes and scones, plus a pot of tea. It looked scrumptious, I'd loved to have joined them, but I was far to tense to eat a thing.

I wasn't 'on' till the majority had finished their tea. To begin with I gave a short account of my own writing 'journey' plus an over-view of the changes in publishing since I was first published.  I didn't read from chapter one of TORN, and I explained why to my audience. As it is an account of a violent, drunken altercation, with the unexpurgated language you might expect, I thought it an unsuitable passage to read out loud, in the afternoon, to tea drinking ladies in Cheltenham!   Instead I read a short intro - a sketch of the back-story and the events leading up to my excerpt, which was taken from a few chapters in. The excerpt was about 15 mins long.

My husband says I was brilliant. I think we can take that with a pinch of salt. He was probably more nervous than I was and deeply relieved that I pulled it off, without embarrassing him or myself.  I did a Q & A. There weren’t many questions, so I just rambled on and made sure I gave the RNA a plug. 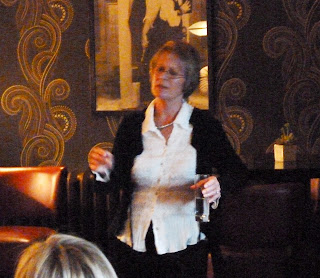 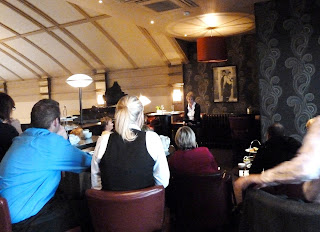 It wasn't until I looked at the photos that an odd little coincidence occurred to me.  I'd started my talk by admitting I was nervous but that I should have a genetic memory of 'performing' as I am directly descended from at least two generations of singers (paternal grandmother and great grandmother) and music hall artists.  (paternal grandfather and great grandfather).  I was speaking in front of a poster of Laurel & Hardy. My grandfather, Jamie Dallas, had known Stan Laurel from the days before he went to the US when he  performed in London with Fred Carnoe's army. 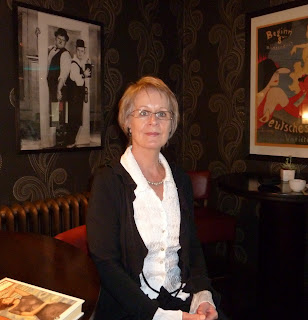 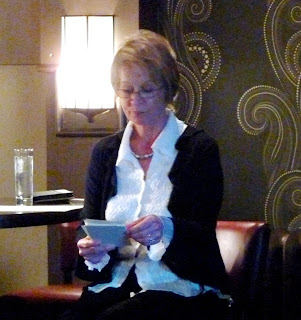 When we got home we opened a bottle of fizz to celebrate.  I'm not expecting a spike in sales, that's not the reason I did it. It's a skill writers need to have in this day and age, and for me, who's never done anything like it, it was a personal achievement, which I'm mightlily relieved to have accomplished and which I now know I could do again, and probably better next time.
Posted by Gilli Allan at 6:33 AM No comments:

Throughout the Cheltenham Literary Festival, the Daffodil Restaurant, (18-20 Suffolk Place, Cheltenham, Gloucestershire, GL50 2AE) is running an ‘afternoon tea at the Daffodil’ event.

Every afternoon a writer or writers will be going in to talk, read from a current book and answer questions, all to the delicate clink of porcelain!

And guess what? I have been asked to kick off the run, on Friday October 7th!

It would be lovely to see friends and acquaintances there but I don’t expect it. Actually, I don’t know what is more scary, the prospect of performing to a roomful of people I know or a roomful of strangers. Or, even worse, maybe – an empty room!!!!!

It’s advisable to book, apparently, so they have an idea of numbers. Personally I’m only expecting 3 old men and a dog.