In introducing this book the one thing I am sure of is that it's for Young Adults.  But I don't know whether to describe it as Paranormal, Romance or Adventure. Or maybe it's a mix of all three...?  Better still, I'll shut up and hand over to Karen.


RISE OF THE SOUL CATCHERS

Can love survive anything – even death? 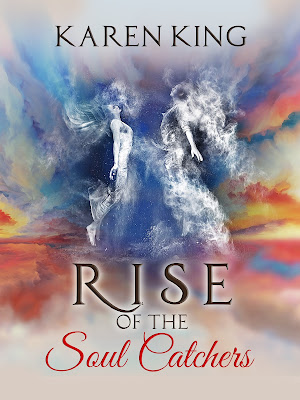 Sapphire and Will vow to love each other forever. But when a car crash ends that dream all too soon, they find themselves separated in an afterlife with zones named after the colours of the rainbow. Determined to find each other, they start an adventurous journey alongside a cast of characters they don't know whether to trust. They finally meet again in the terror-fuelled Red Zone where the dreaded Soul Catchers are planning on taking over the entire afterworld and are plunged into a dangerous battle. Is their love strong enough to survive against the odds?

My mind is a mess. I can’t leave Will. I’ve got to help him. But how can I? I don’t know this world. If I don’t go with Grandpa and my family, I’ll be on my own. The Soul Catchers might get me too.

Soul Catchers. The very name makes me shudder. Have they got Will? What are they doing to him?

Will and I promised to love each other forever. How can I go without knowing he’s safe? I can’t leave him. But if I stay, how can I help him? My head is such a mish-mash of thoughts and fears I’m hardly aware of Grandpa leading me over to the silver bus, of climbing up the steps to board it.

It’s crowded so we have to go right at the back to find a seat. Grandpa gently pushes me into the seat by the window. I look out and see the guy still waiting on the steps. He’s not giving up on his sister. How can I give up on Will so easily?

That guy belongs here. He knows his way around, I remind myself. I’m new. I need to stay with Grandpa. Besides, the zone guides will find Will.

What if they don’t? I might never see him again.

The realization smacks me like a punch to the stomach, momentarily winding me.

I can’t go. Going with Grandpa might mean leaving Will forever and I can’t do that.

I can get another bus and meet up with Grandpa later, when I find Will. He could be on his way here, right now. I think of him walking in alone and confused like I was, of running to greet him, hugging him, letting him know that even though we’re here we still have each other. I have to wait for him.

I get up from my seat, almost jumping over Grandpa in my haste to get off.

“I’m waiting for Will,” I shout as I race down the aisle toward the closing door.

I can hear Grandpa and Aunt May calling me to come back but I ignore them. The doors are closing. With a final burst I reach them, slip through the narrowing gap and leap out, landing sprawled out on the ground. I hear the doors slide shut behind me and a loud whoosh. Scrambling to my knees I swivel around just in time to see the silver bus rise up and soar off into the sky, swiftly disappearing behind the clouds. Okay, so that’s why it’s called a sky-bus. Now what the hell do I do?

Rise of the Soul Catchers is  published on 25th April. 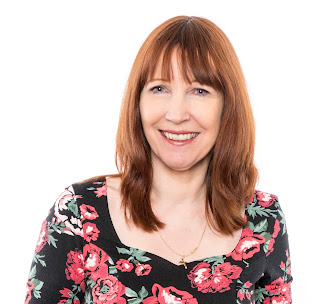 Karen King writes edgy YA with a heart and sassy, heart-warming romance. Her first YA, Perfect Summer, was runner up in the Red Telephone Books 2011 YA Novel Competition and her second YA, Sapphire Blue, now republished as Rise of the Soul Catchers by Littwitz Press, was called ‘the best YA book out there right now’ by a reviewer for Ind’Tale magazine.
Karen has four romcoms published by Accent Press, and a fifth one is due out in June this year, Her latest romcom, The Cornish Hotel by the Sea, was #3 in the Amazon bestseller holiday reads.  She has recently signed a two book-contract with Bookouture for more romance novels.
Karen has also written several short stories for women’s magazine and had 120 children's books published. When she isn’t writing, Karen likes travelling, watching the ‘soaps’ and reading. Give her a good book and a box of chocolates and she thinks she’s in Heaven.