My Connection to The Mildenhall Treasure 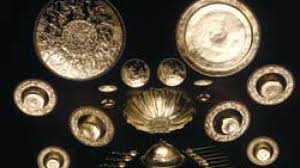 Not many people dig up treasure, but my uncle did …. or did he?

My childish imagination was very inspired by the idea of archaeology – the closest 'ology' there is to treasure-hunting.  I was probably influenced by the fact that my great uncle, Sydney Ford, who was a farmer in West Row near the Suffolk town of Mildenhall, ‘discovered’ a hoard of Roman silver tableware, during WW2.

I put discovered in inverted commas because on more recent investigation, the story is a lot less straightforward than Uncle Syd ever admitted to. I admit to plundering Syd’s story when I began to write BURIED TREASURE, a book with an archaeological theme.


In his account (which I heard from his own lips), he was driving the tractor and plough which turned up the hoard from one of his fields. He took it home and cleaned it up. At the time, he thought it was pewter.  He tried to declare the find and took a piece to London - to the British Museum - to ask their advice. Because it was war-time the British Museum was closed, so he kept it. What else could he do?  At Christmas he kept his fruit and nuts in the great dish.  But a nosy neighbour tipped off the police and the hoard was taken away from him after the war, so he never got any credit for finding it, nor any recompense. This was his story and of course we all believed it.

In more recent years I’ve learned more about the ‘official account’.  It was not Sydney but his farm worker, Gordon Butcher, who turned up the treasure. It wasn’t even found on my uncle’s farm at all, but on tenanted neighbouring land that he was looking after. He was unable or unwilling to be clear about the specific location where it was unearthed, the account changing every time he was interviewed on the subject.


Partly because of this vagueness, there has even been doubt cast over the fact the hoard originated in the Mildenhall area at all.  Roman villas have been found around that location, but nothing of sufficient grandeur to have owned such a service has ever been excavated in the environs.  Other suggestions I’ve read, linked to the previous point, is that it was stolen (from whom or from where?) and had been hidden by twentieth century villains or by airman flying from Italy into the airfield at Mildenhall during the war.

The treasure wasn’t snatched from him unexpectedly, as Syd would have it later. He did know in advance he was going to be relieved of his fruit bowl and the rest apparently, and family rumour has it he was able sort away some choice artefact from the hoard before the arrival of the police

Declared treasure trove The Mildenhall Treasure can now be seen in the British Museum.  Contrary to Uncle Syd’s claim, he was recompensed - £2,000 divided between Sydney and his ploughman, Mr Butcher – but he never did get any credit.    You won’t see his name attached to the exhibit at the British Museum.


Great Uncle Syd, was a favourite. We always loved seeing him.  He was mischievous and rascally and had a definite twinkle in his eye which, looking back, I suspect was something to do with the fact he knew he was fibbing.

Even as an adult I retain some of my gullibility. I can still be surprised when I discover someone has been less than truthful. But these days I am far more likely to add a dose of salt to an unlikely tale. But when I was young, I completely accepted the story as he recounted it. (As did all the family - there was never a trace of suspicion.)  Now, looking back, I can quite believe him capable of a degree of roguery, but I don’t suppose we will ever know the real story; Syd is long gone and unable to provide any answers.