Drawing a Naked Male Model Can be Challenging

They can't always keep as still as you would like


All my books have grown out of the “What if...?” question.  LIFE CLASS is no exception.

Initially I had the title but no story, so I began to reflect on the accumulated experience of attending life drawing lessons over many years, and there was one incident that cried out to be revisited.
Before I arrived at Croydon College of Art (now called Croydon School of Art)  aged sixteen, I knew no boys, apart from my cousins.


For a shy, gauche and inexperienced suburban kid from an all-girls Grammar School - becoming an art student was a very big deal.  I’m sure it was a big deal for all of us in First Year Foundation.  Within days, however, we’d relaxed with one another enough to become noisy and brash, and to show off. Then we had our first life class.

Of course, we all knew this weekly lesson was a part of the curriculum, so at least we weren’t taken by surprise. But knowing that something is going to happen does not necessarily make it easier to deal with when it does. Imagine us, not yet entirely comfortable with one another, suddenly confronted by a very ample naked woman who we were expected to draw. The lesson passed in a stunned silence from the mixed class of very young students.  The teacher made up for our unusual hush by raising his voice, as if suspecting we’d all turned deaf as well as mute.

“Observe the landmarks of her body and how they relate to one another,” he boomed. “Her crotch ... her belly ... her navel ... her nipples!”

In retrospect, it was funny.  At the time it was more agonising than amusing.  I found it a challenge to even look at her without blushing, let alone to closely study those parts of her body I was too bashful to say out loud!  But, despite the initial embarrassment, I swiftly became used to studying a naked stranger.  In fact, the life class rapidly became my favourite part of the week.  I was captivated by the challenge of trying to interpret the human body in a drawing.


When I left college I was unable to find a job in the art world, and for the next few years I was a depressed sales assistant in various London department stores - many of which no longer exist.

The aspect of art I missed the most was the life drawing, and I signed up for an evening class at the London School of Printing. I continued with this for a year but, after a day’s work, slogging over from the Strand to the Elephant and Castle on public transport became a bind and I gave it up.

At the time it felt like my life was trickling away. In truth it  wasn’t so long before I managed to secure my dream job as an illustrator in an advertising design studio and for the next few years I was very happy earning my living doing what I’d always wanted to do.


As I became more accomplished, however, the work became more demanding and stressful. The workload was always erratic and, when a new commission did come in, it was typically wanted first thing the next morning.

So when I had my son, I was content to take a break from commercial art. Now at home full-time, I revisited my teenage hobby of writing, and I also signed up for another life drawing class.  Baby-sitting responsibility was my husband’s for one night a week, enabling me to do something just for me.


On that first evening I set out feeling excited and tense.  I had the directions and, as I drove over to the school in Wandsworth, I rehearsed in my mind what faced me.  I knew that my life drawing skills would be rusty, I’d not employed them for years, but there was something else on my mind.   In my experience ‘Life’ models were predominantly female.  At college, over a decade earlier, we’d occasionally had a male model but, maybe to spare the blushes of the very young class, they’d always worn boxers or posing pouches. (One old fellow always wore his black beret, as well!) Surely in these more liberated times, and in an adult class, a male model would be stark naked.


My tension about the evening ahead ratcheted up a few more notches when I couldn’t find the school.  I must have been ten or fifteen minutes late when I eventually burst into the studio. 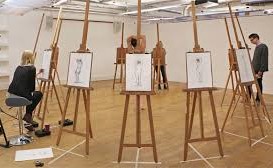 Everyone turned to look at me.  The teacher was male.  All the students were male.  And - lying stretched out sideways on a mattress, his head on his hand - the entirely naked model was male.  Wanting to disrupt proceedings as little as possible, I grabbed the first empty spot I saw.  I didn’t think about the position I’d chosen until I’d sat down on the donkey (a wooden bench with an adjustable front flap), unwrapped my drawing pad, and raised my head.  Everyone else had arranged themselves in a semi-circle behind or to the sides of the model.  I was the only one with a totally full-frontal view.  I looked at him, and he looked at me...

You will find a fairly accurate account of what happened next at the start of Chapter Three of LIFE CLASS.  I have given the experience to my heroine, Dory, who is a novice artist attending her first life drawing class. She is no shrinking violet but she finds it an unsettling experience.  It unsettled me at the time, but I didn’t allow the incident to put me off.
I attended this particular class for a couple of years and we never had the same model again. Then I changed to another, a daytime class with a crèche.  And throughout the years since, I’ve continued to attend life classes wherever I’ve lived.

I don’t do life drawing because it’s easy. Sometimes it is, but often it’s hard. It can feel almost impossible - particularly if there’s a weirdo model (and some have been very weird!)
But, thankfully, they’re the exception not the rule.  Despite the failures and the frustrations of the discipline, I am drawn back again and again, trying to capture the mass, the angles, the points of balance, the fall of light and shade on that most intriguing of all subjects - the human body.

LIFE CLASS
Four people hide secrets from the world and from themselves. Dory is disillusioned by men and relationships, having seen the damage sex can do.  Her sister, Fran, deals with her mid-life crisis by pursuing an on-line flirtation which turns threatening. Dominic is a lost boy, trapped in a life heading for self-destruction.  Stefan feels a failure. He searches for validation through his art alone.
They meet regularly at a life-drawing class, led by sculptor Stefan. All want a life that is different from the one they have, but all have made mistakes they know they cannot escape. They must uncover the past – and the truths that come with it - before they can make sense of the present and navigate a new path into the future.

What a great post, Gilli. I love the way we , as writers, bring buried experiences back to life. Curiously, I used to sit for the Higher Art life drawing at my school. As befits our ages at the time, I was fully clothed. My muscles remember how very difficult a skill sitting still is. The reward was usually a couple of bars of chocolate. anne stenhouse

Thanks Anne. I think men have more of an issue with a certain part of the anatomy, which I accept can be totally involuntary. The experience I talk about, however, the man knew exactly what was happening and from the way he stared at me, I have a feeling he was enjoying it and imagined quite wrongly that I was too! As if......?!

HA! I can imagine how awkward that must have been. Thanks for sharing your experience with us Gilli, oh how we suffer for our art, us authors.