In 1988, when we bought Woodbine Cottage in the Cotswolds, we were told by the sellers that the gnarled old grapevine which grew up beside the old front door, fruited. But in the twenty something years we’ve lived here, the vine has never had grapes. Very annoyingly, there are other cottages in the village with outdoor grapevines growing on the old stone walls, and they do have fruit. Sometimes they are laden! I have listened to Gardeners Question Time and cross questioned my neighbours, but have never got to the bottom of why our vine is so stubborn.


Woodbine Cottage is situated near the top of the valley. I have always understood that it - in fact probably the entire village - was part of the demesne of Standish Abbey. We know that the monks made wine from grapevines cultivated in the valley. I have even heard it said that the Romans had grapevines in the valley. So it has always been a notion I have clung to that our grapevine (grapes or not) was very ancient, or was at the very least a cutting from a cutting of the medieval vines which grew here.

Recently, a man stopped beside our garden gate to chat. It turned out he’d lived in the cottage, with his mother and grandparents, in the 1940s. We asked him in. Mike was flabbergasted; of course the house has been modernised, and extended countless times, over the years since he lived here as a little boy. Then it didn’t even have running water, they collected water from the spring, which runs past the back door, and there was an outdoor earth closet. And in his day the garden was four times larger. They kept pigs and chickens, and rabbits for eating. There was an orchard and watercress beds. And of course they grew their own vegetables.

This week, Mike brought his 91 year old mother, Gladys, to see us. In a way, though grateful to us for the opportunity to revisit her old home, I think the experience saddened her. Though perfectly with-it and sprightly, she couldn’t really recognise the house she’d known as a young woman. Apart from the decor and the different layout, it’s now more than twice as big. She spoke of it as a mansion!
“It must be worth a million,” she said. (I wish!) 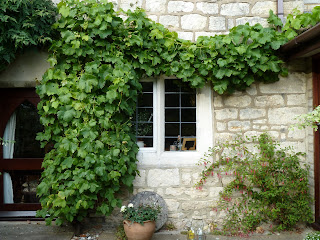 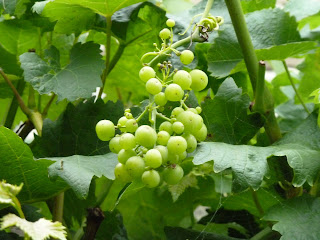 They had brought a few old photographs with them, which I’ve copied, but they’re family snaps and there’s little you can see of the cottage as it was then. And sadly, I forgot to take a picture of Gladys and her son Mike.  The one thing I was determined to do was show Gladys  the grapevine. I wanted to know if it had fruited in her day, and to tell her we hadn’t had grapes for all the years we've lived here....
“But look, we have grapes this year! The year you came back to visit the cottage!” My pathetic attempt to make connections, to invoke the possibility that the house had a kind of spooky prescience, fell flat.
“We didn’t have a grapevine there then. It was rose,” she said.

Still, it was a very interesting interlude and lovely to meet them. It gives us a better understanding of the history of our home. Even if I now know my grapevine isn't as ancient as I'd hoped.
Posted by Gilli Allan at 6:09 AM

I enjoyed reading this, Gilli. It is the sort of descrition I use in some my books which beging around 1900. My late sister lived at Meysey Hampton - lovely part of the country.
Well don with your Blog - Gwen

Sorry about spellings - I usually do manage to write English.

What an interesting Blog and I love the name of your cottage it sounds gorgeous.

This post was so interesting. We used to live in a Victorian terrace in Richmond and I always wondered about the people who'd lived there before us. With original fireplaces in every room you could feel a sense of history which don't feel now we're living in a house built in 1984! At least we don't get the damp problems anymore though!