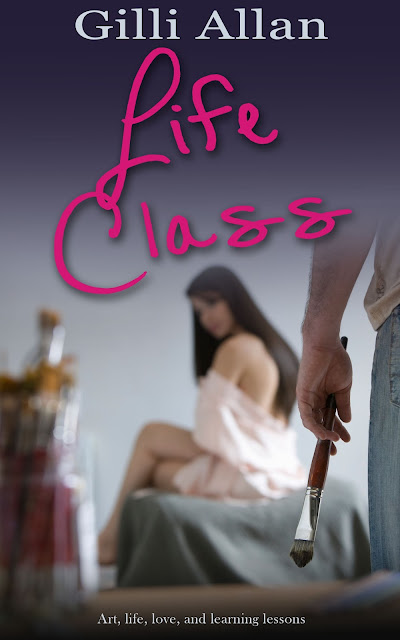 I am utterly thrilled.  LIFE CLASS is the last book in my three book deal with Accent Press. It now sees the light of day in its new incarnation.

Lyn Sofras, the Manic Scribbler, says:
"....kept me spellbound, unable to find a place to stop reading and therefore carrying on long into the night. I love it when a story does that for me and that's why it has to have five stars. Read it - you will not be disappointed."

About art, life, love and learning lessons, LIFE CLASS follows four members of an art class, who meet once a week to draw the human figure. All have failed to achieve what they thought they wanted in life. They each come to realise that it’s not just the naked model they need to study and understand. Their stories are very different, but they all have secrets they hide from the world and from themselves. By uncovering and coming to terms with the past, maybe they can move on to an unimagined future.

‘I work in the sex trade,’ was her usual answer. It amused her to watch the battle for self-control on the face of whoever had asked the question, and their dawning relief when she added the qualifier, ‘… the clean-up end.’
Her job had always had its lighter moments, but today, since she’d come back from her lunch break, her mood had plummeted. On the pin board above her microscopes, official instructions about hygiene, circulars, and timetables jostled with the cartoons and jokes members of staff had attached. Her contribution – NEVER TRUST A SMILING HETEROSEXUAL – was boldly inscribed on a Post-it note. Even though she’d become used to seeing it, it usually it made her smile. Now, it was neither funny nor relevant.
She had only seen the patient’s back view but had recognised the boy instantly. And it was impossible not to start putting two and two together, given whom she’d spotted waiting in his car outside.

Earlier, she’d walked back from the city centre, her mind buzzing, consumed by thoughts of the house, her mad offer for it … and its owner. She’d had to juggle with her bags, umbrella, and key fob to get the boot of her car open and stow her purchases. Just as she slammed it shut, the sun came out and a sudden flare off a puddle momentarily blinded her. She averted her eyes. In that instant, she recognised the man she’d been thinking about, sat in the car parked next to hers.
What a comedown. But it didn’t have to mean anything. Perhaps it was just a bizarre coincidence. Even if they had come together, there were any number of explanations. Perhaps he’d come as a ‘buddy’, or in loco parentis to support the boy. She rubbed at her forehead. Why was she trying to convince herself that the obvious conclusion was the wrong one? And what was it to her, anyway? If you work in this field you can’t be judgmental, she reminded herself. Other people’s lifestyle choices are none of your business.
Posted by Gilli Allan at 5:29 AM