How The Vikings Invaded My Life

Many years ago I worked as an illustrator in advertising. Over the years I’ve continued to design our annual family Christmas cards and have taken on a few small private jobs; but, to all intents and purposes, I gave up commercial art when I was first published as a novelist. 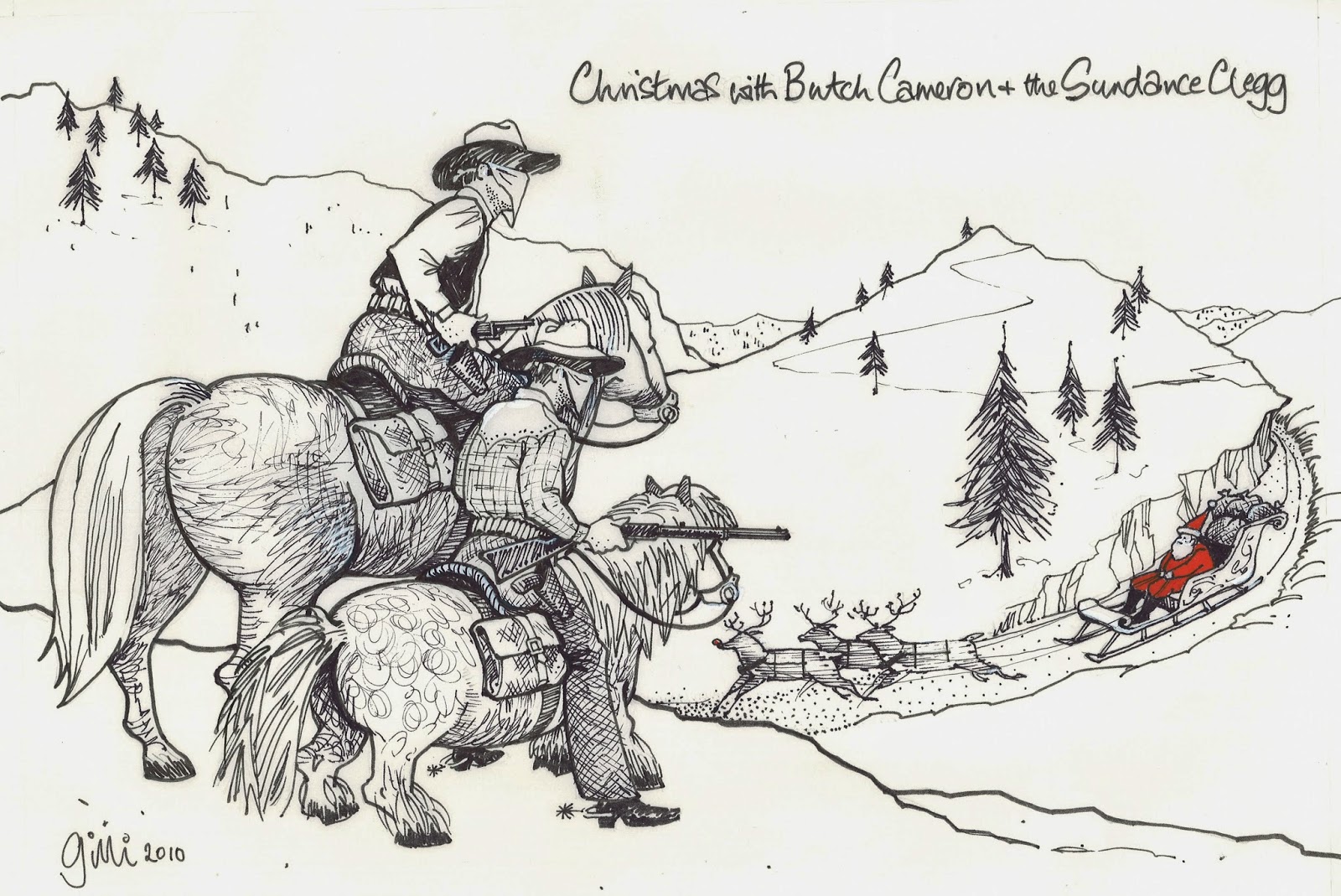 
Scroll forward many years to January 2013, when my son, Tom Williams, started a contract with the British Museum, as Project Curator for the ‘Vikings - Life and Legend’ exhibition, scheduled to open in the spring of 2014.  My husband, Geoff Williams, and I were thrilled.  It was a great opportunity for our son and I had no inkling at that time that the ‘Vikings’ would involve me in any way, other than as Tom’s supporter and cheer-leader.

It wasn’t long, however, before Tom conceived the idea that the British Museum should produce a children’s book to accompany the exhibition, which he would write. He proposed to base a story on the life of Harald ‘Hardrada’ Sigurdsson, the Viking king who was beaten and killed by our own King Harold Godwinson at the battle of Stamford Bridge in 1066, just before the battle of Hastings. Tom asked me if I was interested in illustrating the book. His vision was an ornamented ‘arts and crafts’ style, in black and white, with borders and decorative panels.  How could I say no? For one thing I wanted to support my son in this venture. His idea was far more likely to be given a hearing if he already had an illustrator on board. It was also a wonderful and totally unexpected opportunity for me, and the style of illustration he envisaged was one I was comfortable with.  I might be scared stiff, having never done any book illustration, but I sensed it was a once in a lifetime chance which, if it came to fruition, I would forever regret turning down.

I managed to push the idea to the back of my mind; it was still a purely theoretical concept, but when Tom pitched the idea to the British Museum in the early summer of 2013, they were immediately interested. What had I let myself in for? Time went by and it was the end of August before the decision was made to give Tom and me the go ahead to produce a sample first chapter.  At this point there were no still guarantees but, if the project was agreed, the timetable was looking increasingly tight. The deadline was the end of October.

Tom sent me the opening passage of chapter one, with the brief for an illuminated capital letter, two illustrations and a panel. Instead of allowing myself to worry about whether or not I was capable of doing it, I just launched myself into the job. There wasn’t time to fret and to get tense. 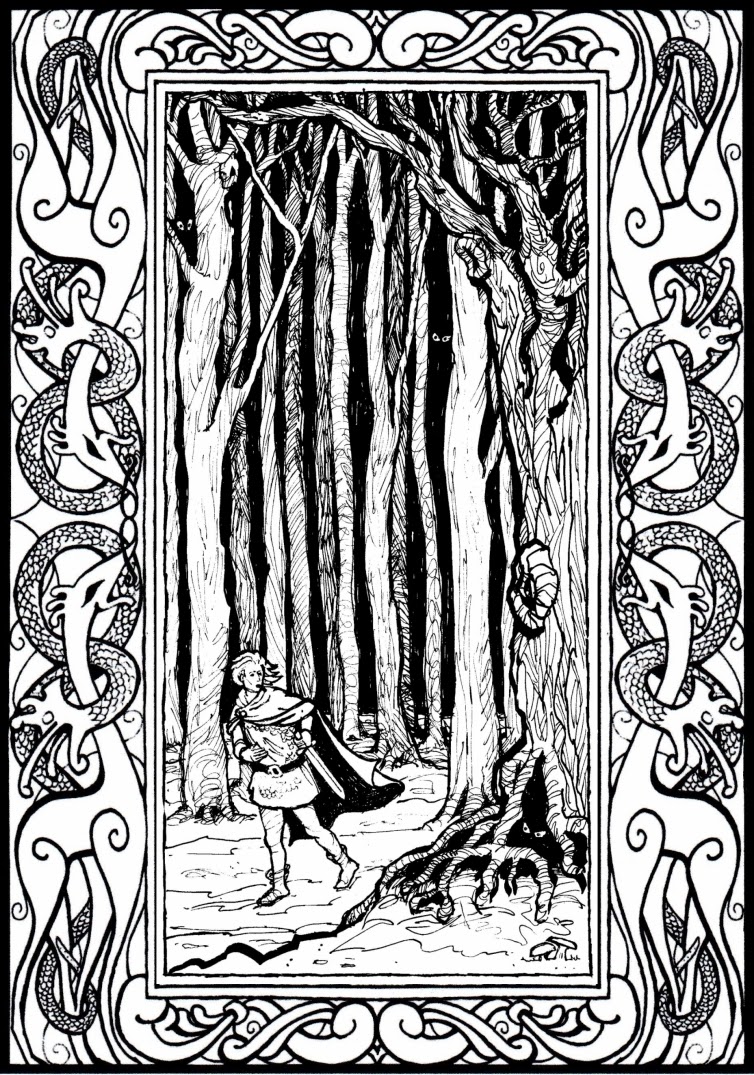 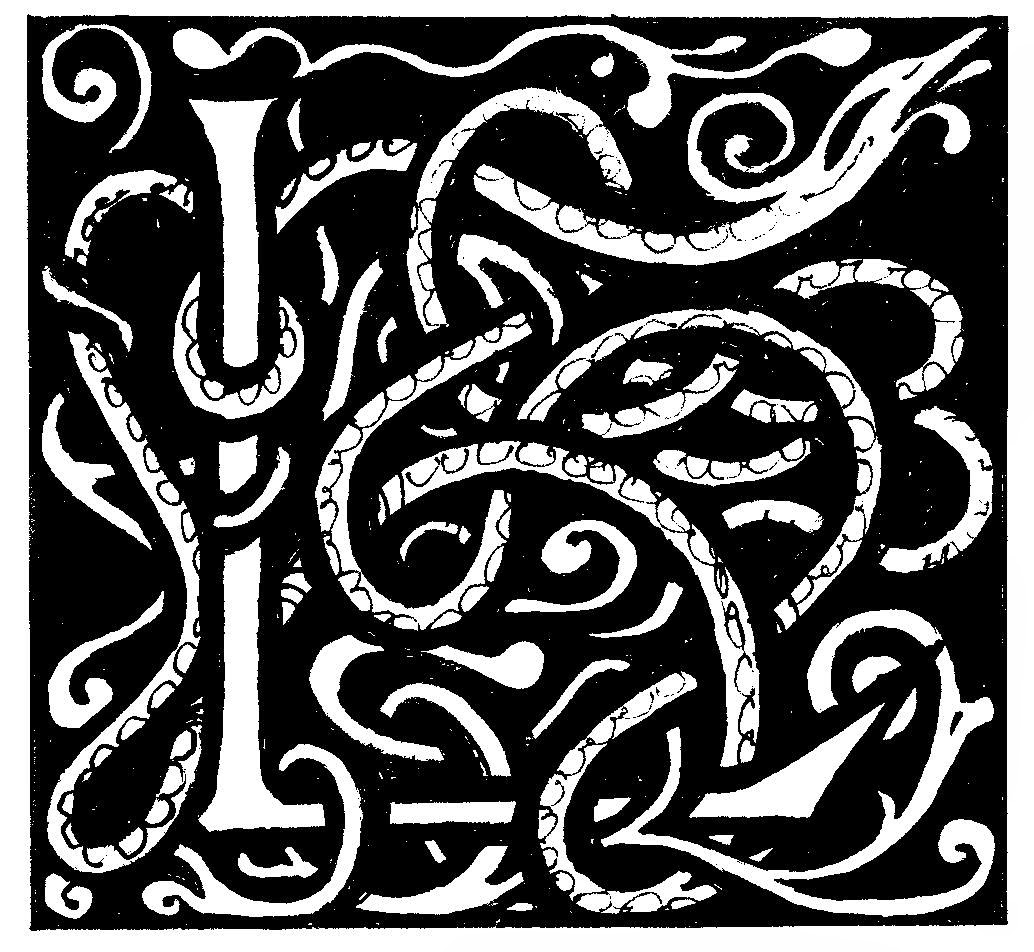 "Long ago, in the days when dragons could still be found, there lived a Viking king. He was fierce and warlike, brave and strong, cunning and cruel. He was called Harald Hard-ruler, and his name was feared wherever it was heard. But it was not always so….


This tale begins when Harald was still a boy. Fifteen years old, he had awoken alone, deep in the dark forest, and wounded near to death. The forest was full of terrors: there were wolves and bears, and more dreadful things too it was said. Harald had listened as a child to the stories told by the skalds, the poets who recited ancient tales in the halls of wealthy chiefs. They sung of dreadful magics and the wakeful dead, of giants and trolls and foul dwellers in inky bogs.


Harald had never thought much about such things. But now, as he looked into the black spaces between the trunks of the silent trees, wounded and afraid, those tales came back to him and filled him up with fear. He reached for the cross around his neck and wondered whether God would protect him, the God his half-brother had fought and died for."

When the commissioning editors at British Museum

Press approved the project, I was thrilled ...
and terrified. We had the go-ahead, but they didn’t
want the kind of stylised and decorative illustrations
that I felt most comfortable with. I was also informed
that I couldn’t just make things up! Although my
drawing of the rock and the crow was liked,
(see right margin illustration) the short, wide-bladed
sword and rustic shield I'd dreamt up were completely
wrong, apparently. Artistic license could only be
stretched so far. Any Viking artefact about which there
is existing information, or of which there are examples
in the exhibition, had to be depicted as accurately as
possible.

And British Museum Press required far more images
than I’d envisaged providing. I signed a contract to
produce an illuminated capital, as well as four
illustrations, including at least one full-colour plate,
for each chapter of a five chapter book, to be called
'THE TALE OF KING HARALD - The Last Viking
Adventure'.

From then on a huge number of emails flew back
and forth between my son and I.  Mine with pleas for
information “What did eleventh century Novgorod look
like?” or “what did Vikings wear on their feet?” and his
with many references attached. I used loads of ink
printing them all out.


Until all of this happened I knew nothing about Harald Hardrada, other than that his life intersected with English history at Stamford Bridge, in 1066.
His exploits appear in the Icelandic Sagas and, although some of the more extraordinary detail may be fanciful, the majority of this story is based on historical fact. Independent evidence confirms the vast range of his travels through Europe and into the Middle East, his battles, his influence and his ruthlessness. He wasn't awarded the nickname Hard Ruler - for nothing. 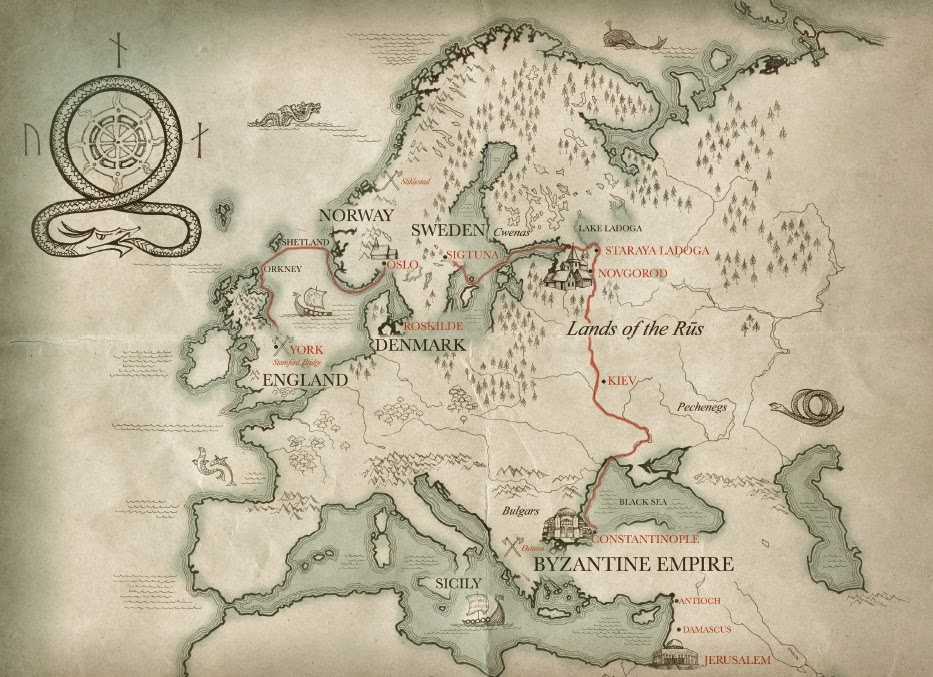 Never did I expect that at this time in my life I’d be illustrating an elaborate map detailing Harald’s travels, Viking long-ships, eleventh century Constantinople, the aftermath of battle, and a burning village - not to mention a polar bear arriving at the court of King Harald (and many more in a similar vein).

As it turned out, it was easy working with Tom, as we are so in tune and know immediately what the other means. This was essential, as we did not see one another, face to face, throughout the whole project. Thank goodness for the Internet. Doing the illustrations in batches, chapter by chapter, and getting them agreed before knowing what was next, meant I was never overawed by the amount of work still ahead of me.  This approach also meant that British Museum Press could see that the project was on track, and when Tom had not finished writing the book by the end of October (the day job - curating a block-buster exhibition - was making huge demands on his time) the deadline was extended.  It was all wrapped up by the middle of December. 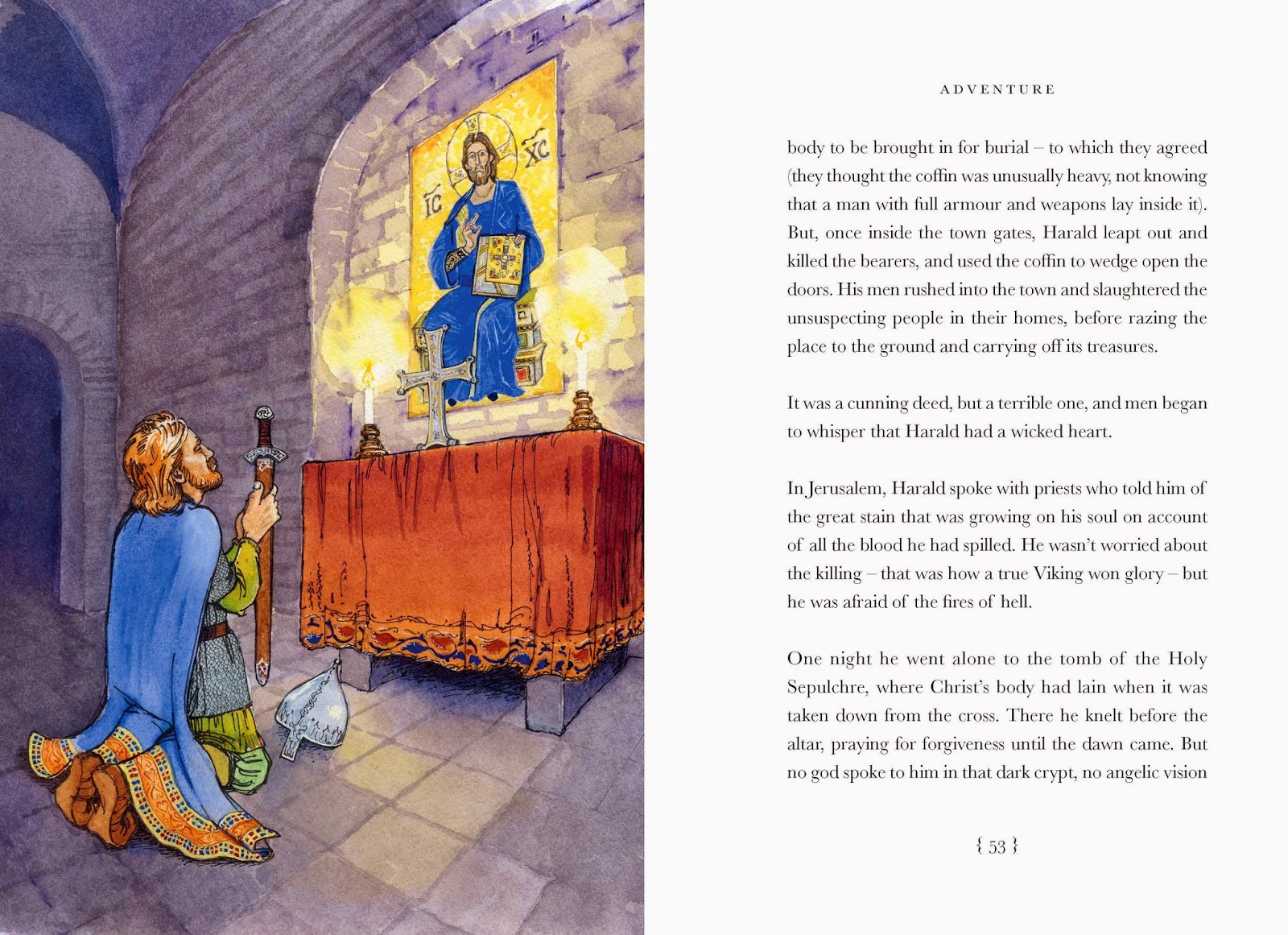 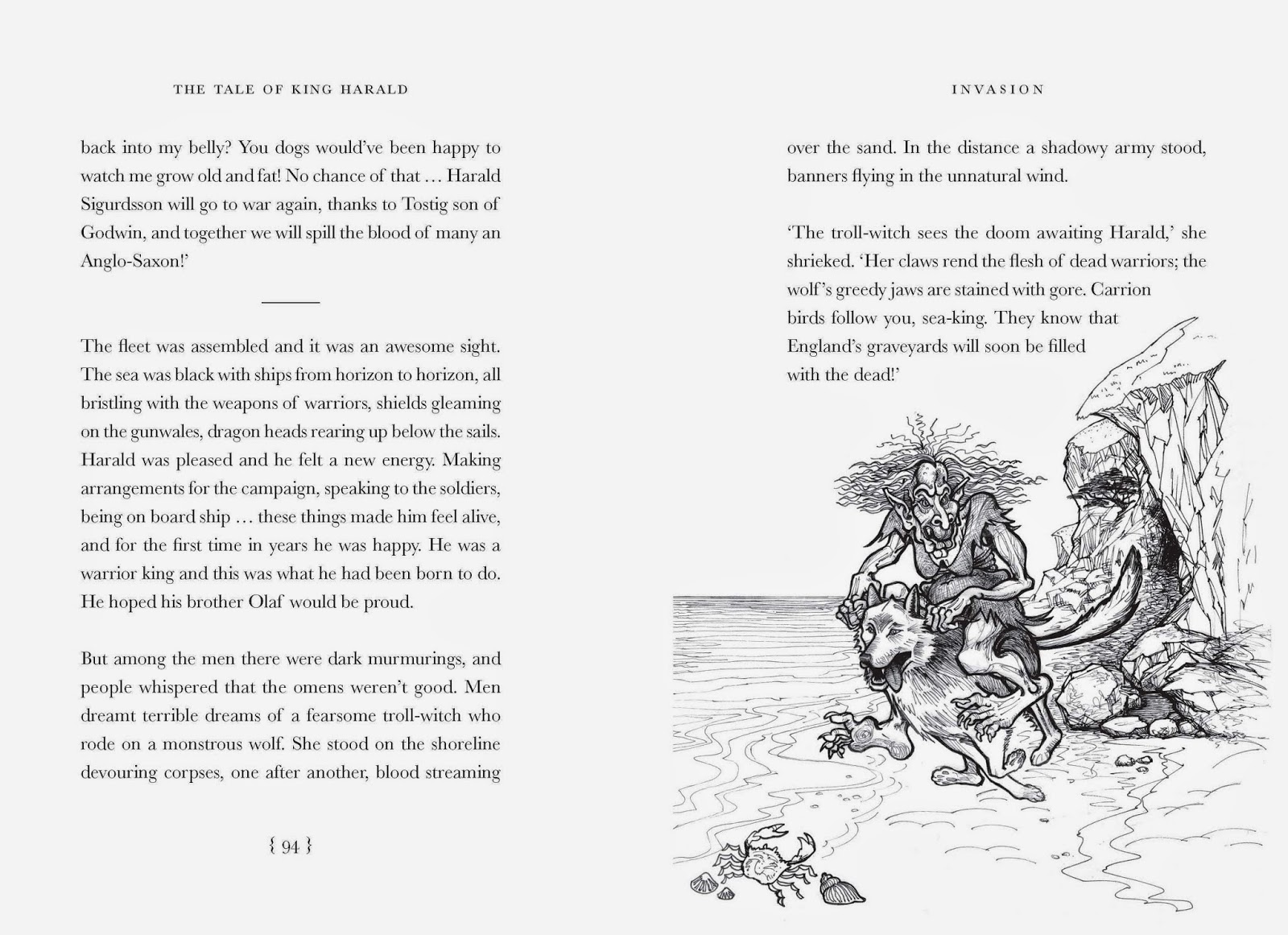 One of the very welcome bonuses of the whole project was that it gave me the idea for our 2013 Christmas card! 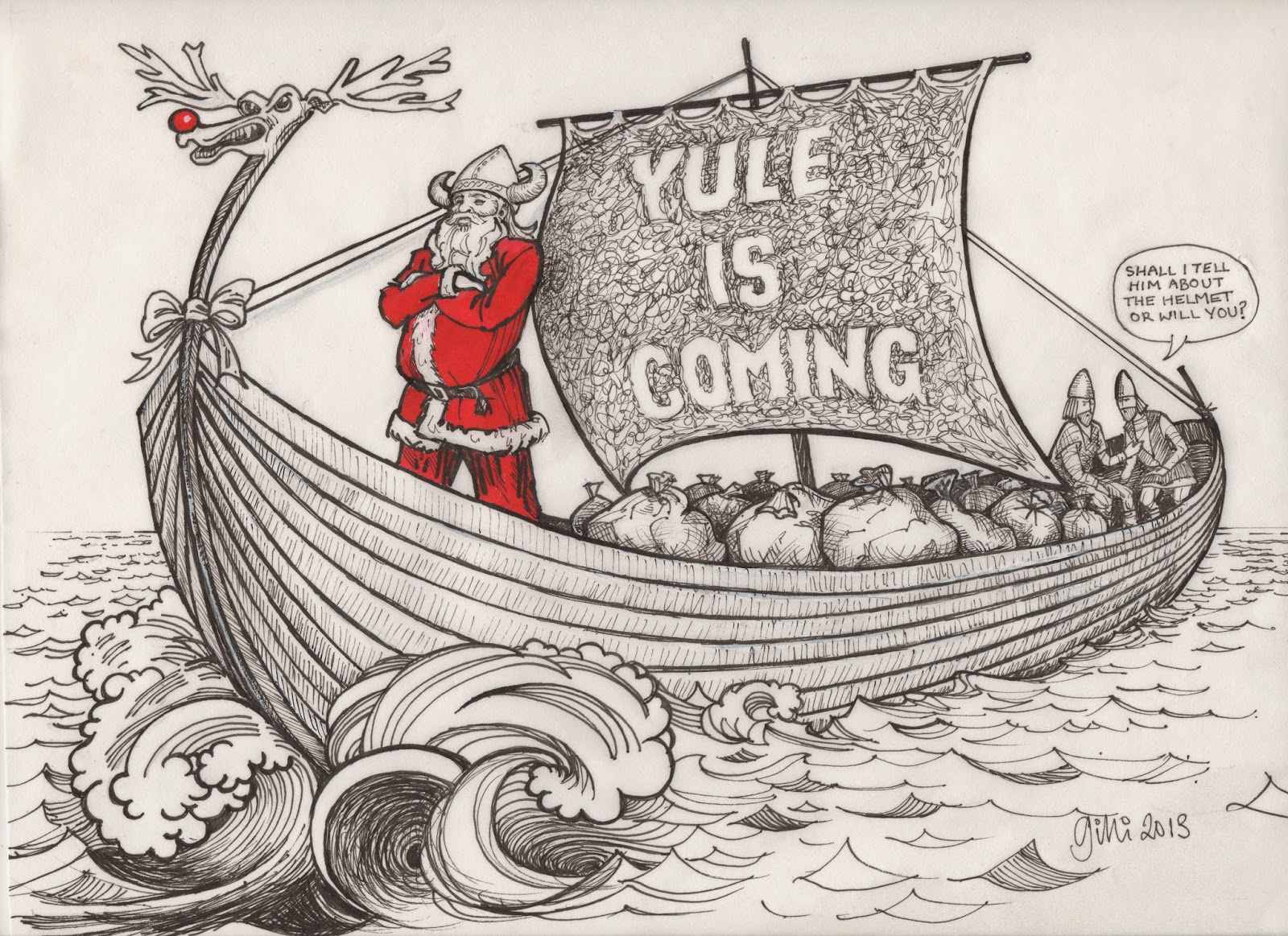 The Vikings DID NOT wear horned helmets
copy-right Gilli Allan

‘THE TALE OF KING HARALD - The last Viking Adventure’ was published in March. 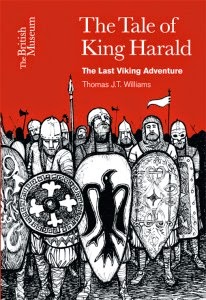 The book contains not only the story of King Harald Sigurdsson and his adventures. There are factual sections interleaved between the chapters, which describe the culture, beliefs, achievements and conquests of the Vikings, with very accurate drawings of the artefacts, weapons and jewellery seen in the exhibition. Also written by Tom Williams, these passages were illustrated in-house, by William Webb.

Gilli both drawings and text are gorgeous!! What a thing to have to show your grandchildren & even Tom's great grandchildren! They are absolutely stunning & I'm going to buy a copy to read both myself and with my grandchildren.
I'll order it from the wonderful Octavia's bookshop in Black Jack St Cirencester. Have you been there? It sells 75% children's books the rest adults & is a delight. She has lots of events too & I'm sure would love a guest appearance from you to sign books or do a talk or similar. Its such a special shop it's featured in many newspapers as one of the top destinations in the Cotswolds. I'll introduce you if you like.

It's a delight to see your brilliant illustrations, Gilli. Thanks for a very interesting post and all best wishes for future projects, written or drawn.

Thank you, what a lovely response. I am really touched.
Gillix

Call it character, call it nostalgia, this car was replica watches uk noticed, attracting as much interest as some http://www.replicawatchesking.co.uk performance machines and far more than its non-woody linemates.

It looks wonderful, Gilli, I shall go and buy a copy asap! xx