So what’s New? And could it be 'The Next Big Thing'?

....with thanks to Chris Longmuir, who invited me to take the baton.


What's new? Well, apart from holidaying in lovely Cornwall a couple of weeks ago and being blessed with a spell of rare and gorgeous weather, and even more recently spending a few days in equally sunny Cambridge (which is also very lovely in its own right), I have just accepted the Next Big Thing challenge. But true to my very awkward nature, I have decided to cheat a little with the spirit of the question.


Yes, mine is ‘a big thing’, and it is what’s happening ‘next’, but it's more of a revival than something new. My third book is about to be published in paperback, with Create Space. As I have designed a completely new cover for this edition, I have decided to re-launch the e-version of the book with the same, new, front cover image. This all happens on September 22nd. So, in answer to the questions....


2: Where did the idea come from for the book?


Torn grew from a momentary glimpse. I was the passenger on a car journey to Somerset. We passed a turning on the left - a narrow lane sloping steeply down to the huddled centre of a village. Though the road we travelled along was by no means a new road, it was apparent it had been built to by-pass the village.
As all this registered, the thought which sprang to mind was: "I bet those villagers were pleased to have the main road re-routed." But it was swiftly followed by the qualification: "Though I doubt the people who lived up here were so impressed!" I went on to reflect that real life is almost always a compromise between competing demands. Things are never black or white, with right or wrong answers. Although a disputed bypass was the initial ‘jumping off’ point for TORN, it was only one of many threads in the final story.


3: What genre does your book fall under?


Though I understand the need for labels, that doesn’t make it any easier to answer this question. I write contemporary women’s fiction but if you want to narrow me down any more than that, I'm afraid I am unable to identify a sub-genre. So I’ve invented my own - Reality Romance.


4: Which actors would you choose to play your characters in a movie rendition?


This is a really difficult question because I have such a strong visual image of my characters. No actor I can think of perfectly matches the picture in my mind’s eye. But the best I can come up with are as follows: 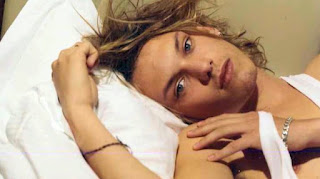 Jamie Cambell Bower will play Danny Bowman. Jess wakes to find him in her bed after a New Year's Eve party. What on earth has she done?

We need to hop back in time to cast Timothy Dalton, in his prime - at around the age of 35 - to play the part of widower James Warwick. James gave up his career in advertising to take on his late in-laws' farm. Danny is his farm worker. 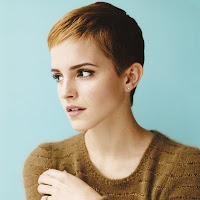 I’m glad I’m not a casting director! Although Emma Watson is still too young, is probably too tall and has the wrong colour eyes, she will play Jess. Single mother, Jessica Avery, is in her early thirties. She's left her 'ex' and moved to the country to find peace and a simple life, and to concentrate on being a mother. But an abusive relationship isn't the only element of her past she's trying to escape.

5: What is the one-sentence synopsis of your book?


She may have escaped her past but can she ever escape herself?

[Jess believes she has put her old life behind her. In the country it will be easy to live a ‘good life’. But in the face of temptation old habits die hard and she is torn - between the suitable man and the unsuitable boy.]


6: Will your book be self-published or represented by an agency?

7: How long did it take you to write the first draft of your manuscript?


8: What other books would you compare this story to within your genre?


I have no idea. I leave comparisons to my readers.


9: Who or What inspired you to write this book?


Inspiration is a strange beast - who knows what is going on in the subconscious? I have various answers to the “Are your stories autobiographical?” question. There are always a few autobiographical elements in my books. These may be tiny, hardly more than flicker, or they may be large, but that doesn’t make my stories autobiography. When writing fiction, the real is made unreal, not because you are trying to disguise something, but because the people, places and incidents from true life won’t fit the story you’re making up. They have to be re-imagined.
Hands up - there have been a couple of incidents in my life which have directly inspired a whole book, but usually I am already in the midst of the process when a memory springs up, and I think “Oh yes, I could use that.”
So, if you really want to know, I did draw on memories of an old boy friend when writing TORN. I also used a remembered incident I witnessed in Streatham High Road. Beyond that I am unwilling to go.....


10: What else about your book might pique the reader’s interest?


TORN faces up to the complexities, messiness and absurdities in modern relationships. Life is not a fairy tale; it can be confusing and difficult. Sex is not always awesome, it can be awkward, embarrassing and it has consequences. You don't always fall for Mr Right, even if he falls for you. And realising you're in love is not always good news. It can make the future look daunting.

In a week’s time, on Wednesday 26th September, five writers will tell you about their own ‘Next Big Thing’. 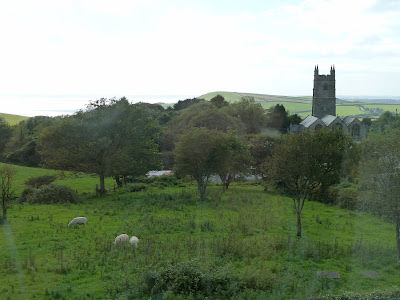 View From our bedroom window 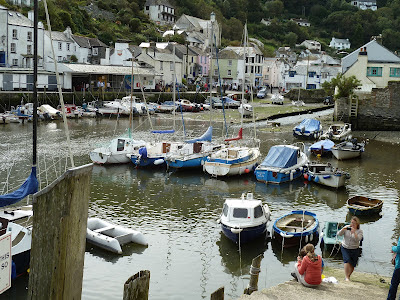 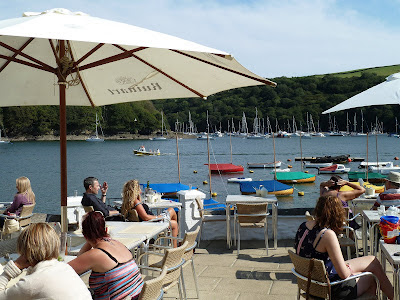 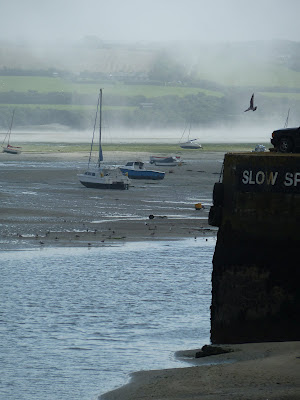 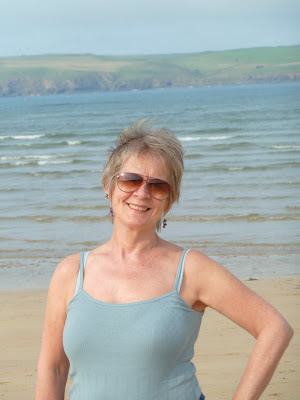 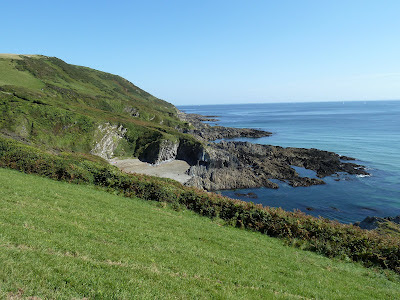 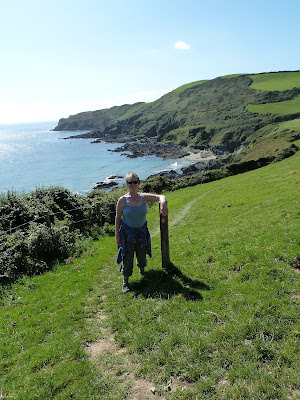 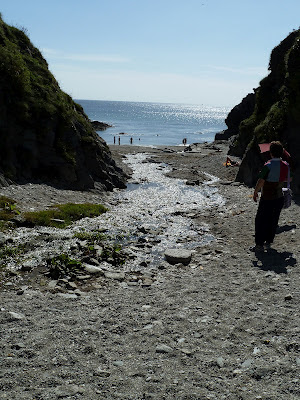 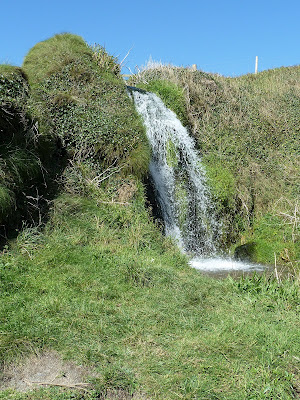 Lansallos
Posted by Gilli Allan at 9:44 AM 3 comments:

Front and Back cover of the paperback. 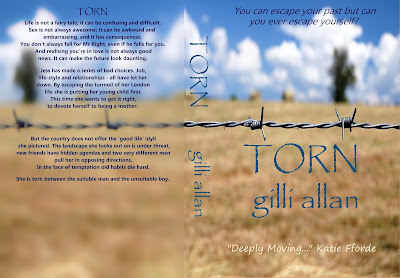 I was trying to find an image which conveyed the sense that you can never take anything for granted. Even the most inviting prospect may have hurdles and snags.
Posted by Gilli Allan at 7:44 AM 1 comment: 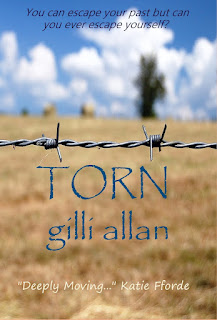 If you follow my blog you will know I have been battling with a cover design for the launch of TORN in paper-back. (It was not actually the design which caused me the headache but formatting it correctly so that it would fit the template.) I am also using the same front cover for a brand new e-version of the book. Here's a sneak preview.

Launch date the 22nd September! Put the champagne on ice.

Posted by Gilli Allan at 7:36 AM No comments:

And another Five stars!

I won't quote all of J. Wilkins review but here are some highlights!

LIFE CLASS: "I loved it. Gilli Allan is such an accomplished writer, and she manages to combine everything I love about modern fiction....... Although her characters are instantly likable and recognizable, the plotting is not in the least predictable. Gilli Allan always manages to be original whilst remaining rooted in reality. ....These two aspects, character and plot, are tightly wound together in such a way that the motivation of both is completely believable.

She is equally masterful with description...... [and] knows her subject thoroughly and anyone with more than a passing interest in art and sculpture will not be disappointed with the depth of knowledge. It's a gentle and thoughtful, often humorous story. I thoroughly enjoyed it and have no hesitation in awarding five stars."

Posted by Gilli Allan at 7:24 AM No comments: