I was recently talking about the excesses that some people go in for at this time of year - priding myself on how tasteful our decorations are compared to the lit up sleighs, snowmen, and Santas that adorn some peoples houses. Then I reflected..... 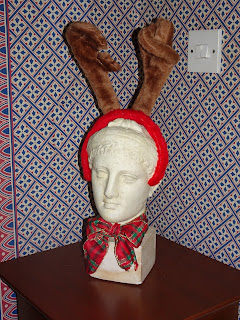 The above left bust is a reproduction of a winner from the Olympic Games - so my husband calls him Victor (although, as he points out, Victor is Latin but the sculpture is Greek). For several years now, at this time of year, he has worn this festive hat. The above right bust is also a reproduction of a Greek head. It is inherited and came to us unnamed, and we have never assigned one to him or her. Though usually sporting a tartan bow-tie in honour of the season, it is only this year that I had the brainwave of applying the antlers.

The red reindeer always sits on this little shelf in the guest bedroom, but at Christmas his little knitted rider is always placed on his back.  Eric the Sea Gull sits on the sill in the downstairs loo all the time,  his tiny hat comes out annually.  I had to repair it the other year, and replaced the "fur" trim and pom pom. I confess I am a person of habit. 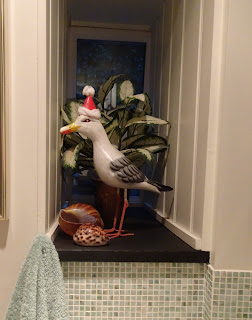 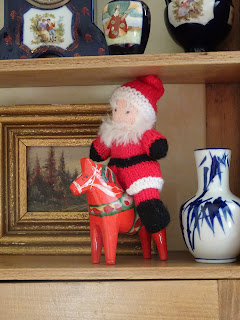 The innovation I am most proud of this year was Toby the Jug.  He's a fairly hideous character who belonged to my grandparents, and because we have a love hate relationship with him, he sits relatively out of sight, at the turn of our top staircase. At this time of year he will usually have either an evergreen or a glittery arrangement growing out of his head. 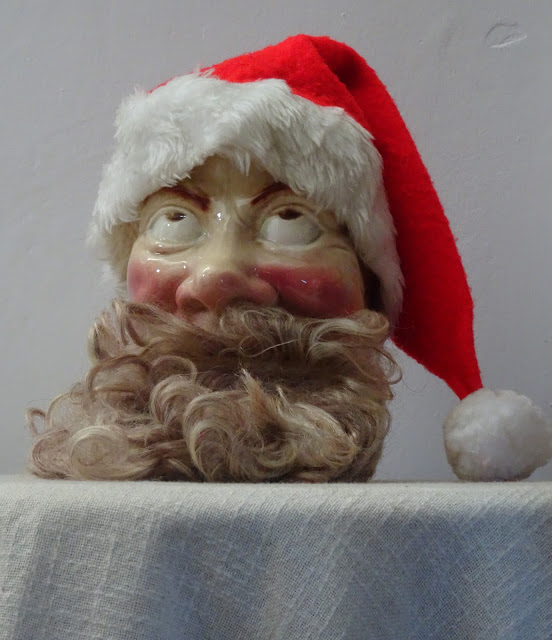 But when I was rootling through the boxes and bags of decorations and other ephemera, I came upon our old Santa beard.  There are no grandchildren and we don't do stockings anymore (although I'm ashamed to admit it has only been a couple of years since we drew a line!) so there is no need for anyone to dress up and go through the mad morning pantomime of distributing what had become large sacks to a family of  adults. Standing there holding the beard, and knowing there was another more modest Santa hat in the bottom of the bag, I had the brainwave.  I have to say Toby has never looked so handsome.